One of the things about travelling is that occasionally but - seemingly regularly - one is surprised by moments of unexpected delight. Such was the case while we were waiting to pick up our rental car at the Grenoble train station. There happens to be a piano in the main foyer of the station and a young man, possibly a student was playing as we passed by ...


The drive south from Grenoble took us back through le Bourg-d'Oisans and on up to Col du Lautaret by which time my nerves were jangling from all the gasps and screeches from the passenger sitting beside me. The roads are pretty narrow and windy, but it wasn't that bad, really. A pause at the col for a hot chocolate (not hot enough and too sweet for both of us) and the obligatory photo of the big bikes settled us down again ... 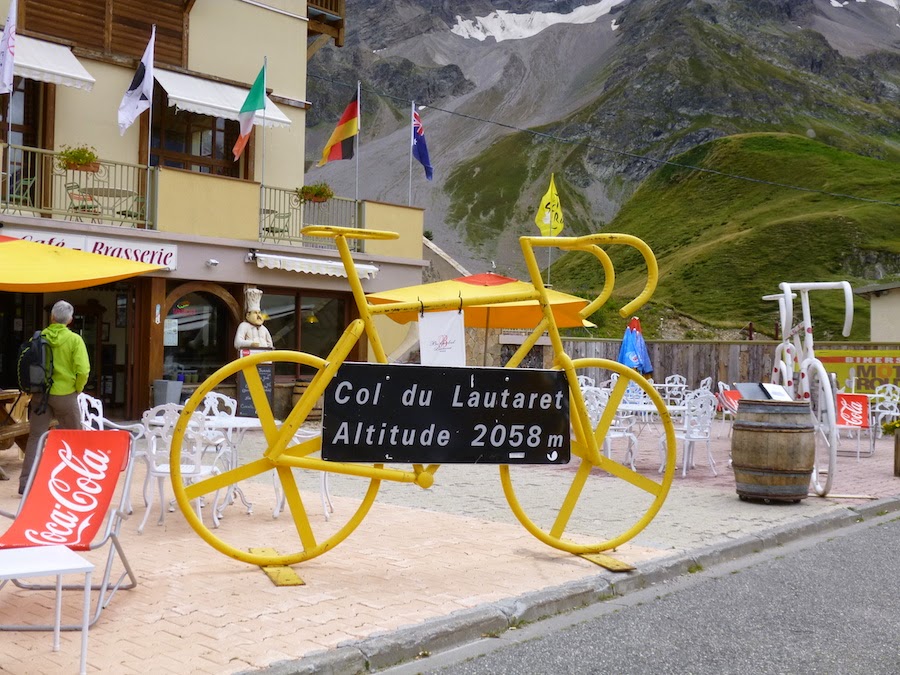 ... before we continued our journey to Briançon to collect the keys to our apartment. By the time we had unpacked all our dirty clothes from the hike and the stuff we'd left in Bourg and settled in we didn't really feel like doing any shopping so we elected to have a meal out in the old town of Briançon at a place called Lou Grand Caire, a charming little restaurant with a traditional French Alps menu supplemented with a hint of Nepal.

Yesterday it rained all day. I'd have happily stayed indoors but Di, being the older, more sensible of the two of us, dragged me out to do some shopping. We got some provisions and she made a wonderful ratatouille for dinner. And that was about it for the day, except that I came across a shocking but unsurprising article in The Age newspaper about a nine year-old girl accidentally killing her shooting instructor with an Uzi machine gun at a firing range in Arizona. So macabre, but it turns out that almost the exact same thing has happened before - more than once. Maybe the final ugly twist of the knife for me with this one is the name of the shooting range: "Bullets and Burgers". I'll leave it there.

Today was a better day. After a great sleep in we woke to a fine day. Di was determined to go to the weekly market in Briançon and I'm so glad she was. We came away with heaps of booty. I took this photo of old tomato varieties, all grown organically or, as they say here in France "biologique" or just "bio" for short ... 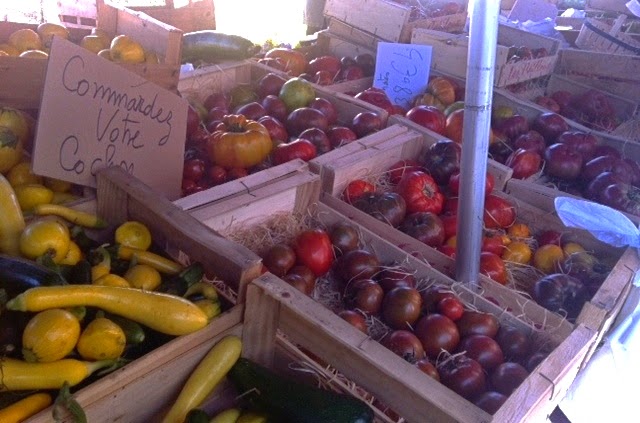 When we got "home" I laid out all the goodies on the kitchen bench ... 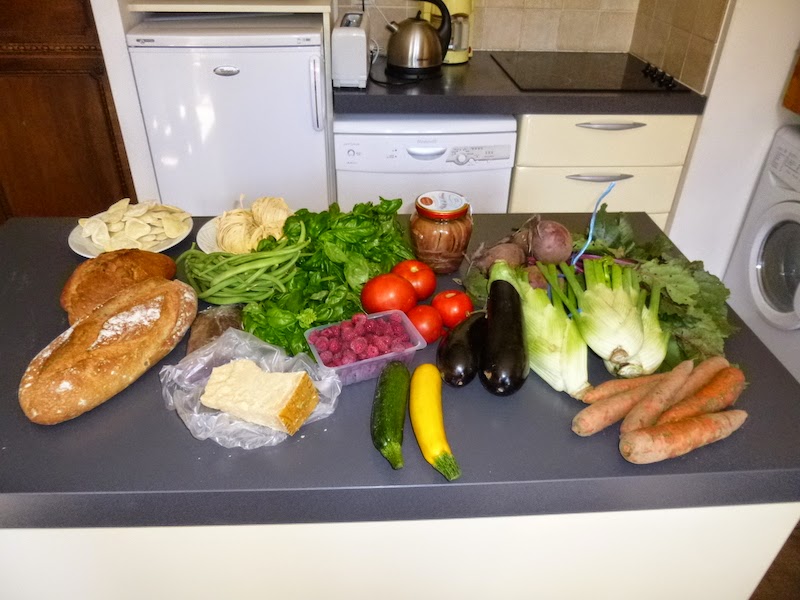 Clockwise from back left we've got: ravioli with mushrooms and parmesan; tagliatelli; basil magnifico; Sicilian anchovies; beetroot; fennel bulbs, carrots (just pulled by the look of them); aubergines; courgettes; tomatoes; raspberries; parmesan; two types of bread; and tucked in to the right of the bread is a chunk of preserved meat and some fantastic green beans.
We've decided that a visit to the market will be a weekly occurrence. Interestingly, it is held on Wednesdays. Seemed unusual to me but Di didn't think so.

Some mundane business followed: we're happy with our apartment but it hasn't been particularly well looked after as a lot of lights weren't working. Happily, the agent organised for an electrician to call us and he got here while we were home for lunch and fixed everything up for us. Now I can read in bed. Yippee!

We decided to see if we could still climb and took ourselves up to the nearest crag - which is about a kilometre's drive and 5 minutes walk away - for some exploratory moves. It isn't the sort of place you'd travel halfway around the world to visit, but it was a good place for us to start. There were three young lads already there when we arrived and we were a little amused by the picture they presented (note the lad in the hammock reading the guide book and the tightness of the rope between the belayer and the climber) ... 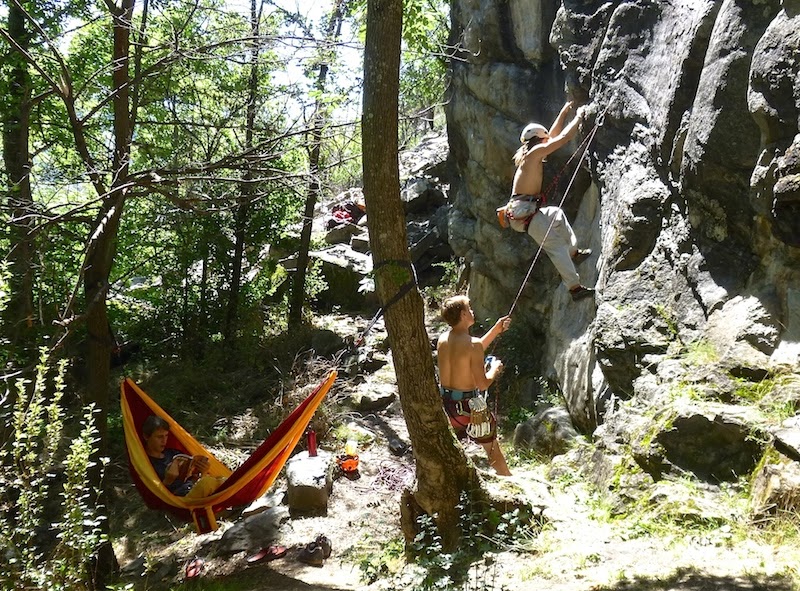 It was good that we'd chosen a crag so close to our apartment. Just after I took this photo I discovered  I'd left my climbing shoes behind and had to race back to get them. It was a lot less inconvenient than the time I left my climbing shoes in the car at the base of the hill at Lowdina, but that's another story and you'll only get it out of me with a great deal of persuasion, possibly involving beer, wine and maybe even spirits.

While we in the middle of getting reacquainted with the business of fondling rock a guided group arrived and this little crag was swarming with adolescents. 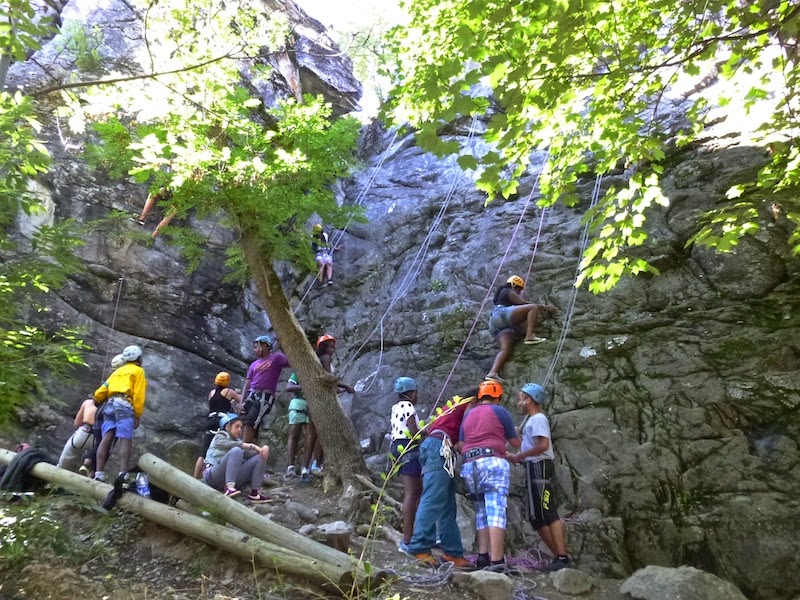 Kind of fun watching them: it brought back a lot of fond memories but at the same time we were glad that that part of our lives is behind us! Anyway, we had enough fun that we're planning on a visit to Ailefroide tomorrow to see if we can find an easy multi-pitch route or two to do. We'll let you know how things went in due course. In the meantime I'd better start getting my gear organised - including my climbing shoes! - as it's a bit more of a drive than today and it's advisable to arrive early in the morning. So long for now ...