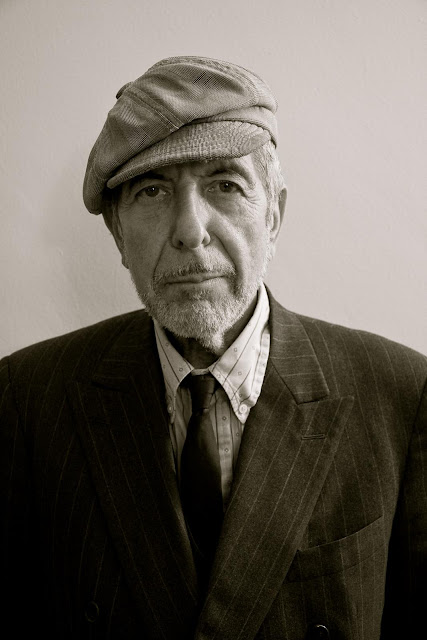 Have just come back from a bike ride (not one of my better efforts) and discovered that Leonard Cohen has shuffled off this mortal coil.  A great loss and a sad, sad moment for those of us who know and love his work. (I wonder: was Trump's anointment as the future leader of the most powerful country on Earth the final factor that caused this great humanist to sign off?) Of course, the news is in all the papers. Even our local rag has quite a nice article - syndicated no doubt.

An expat-Canadian, I came to Australia as a baby - well, a very young man, which is the same thing really - fell in love, stayed and made this country my home. Time and distance have, inevitably, taken their toll and eroded my sense of being Canadian - or "Canajun", as the also late, great Earle Birney - godfather of modern Canadian poetry - would have it. (Going to get a bit sidetracked here. If you don't know the poem " David" that made Birney's name known to the wider world, and you love mountains and the effect they have on the psyche of those of us who do hold them dear, you really ought to read it, as much for the story as anything. On the other hand, two other Birney masterpieces, "Bushed" and "The Bear on the Delhi Road", rather than narrate, paint wonderful pictures of man's tenuous relationship with aspects of nature. Like Cohen, another great Canadian literary genius.)

One might think, with this dilution of my sense of being a Canuck, that I might not feel Cohen's departure so deeply. Not so, it turns out. Having studied Cohen at uni in Canada and transported his two (relatively unknown) novels and some of his poetry with me in a suitcase when I made permanent my move Downunder, I introduced my darling Dianne to him and, if anything, she has become even more enamoured of him than I. (As I said, I was really only a baby when I made this southern migration and isn't our childhood memories and experiences that remain strongest?)

So, here we sit, playing what music of Cohen we have, letting his genius re-infuse our consciousness. All the old great tunes. Naturally, there are peaks that really stand out; we all have our favourites. For me, Suzanne and Marianne are the two that really do it. (These two Youtube videos are worth looking at just for the fact that they span almost 40 years of Cohen's career.) I guess that's the hopeless romantic in me. But for greatest impact on the music scene and the most covers by other artists one cannot go past the seminal "Hallelujah". Jeff Buckley's cover is widely regarded as the definitive version, but K.D. Lang's performance of this great song at the Canadian Songwriters Hall of Fame induction of Cohen in 2006 is a ripper, for both the performance and the occasion.


Vale, Leonard Cohen. And thank you.
Posted by Doug at 6:36 pm No comments: