2015: Hopes and Dreams for the Year Ahead

My first hope for the year ahead is that the surgical team which performed my Achilles tendon operation on Christmas Eve did as good a job as the folks in this video. Naturally, the second hope is that rehab will go well and I will be back on my feet - literally! - before too much of the year has passed.

Unfortunately, climbing will be on the back burner for most of the year. I had hoped to celebrate my 60th birthday in March by climbing The Last Rites, a stonkingly good route at Mt Rosea in the Grampians. The description of that climb on thecrag.com opens with this line: "Fantastic climbing from start to finish." It is meant to be one of the great mid-grade Grampians classics and perhaps one of the best multi-pitch climbs of its grade in Australia. How can one not be attracted? Here is a photo I found on the Net of a couple of climbers at the first belay, with someone on another climb to the left ... 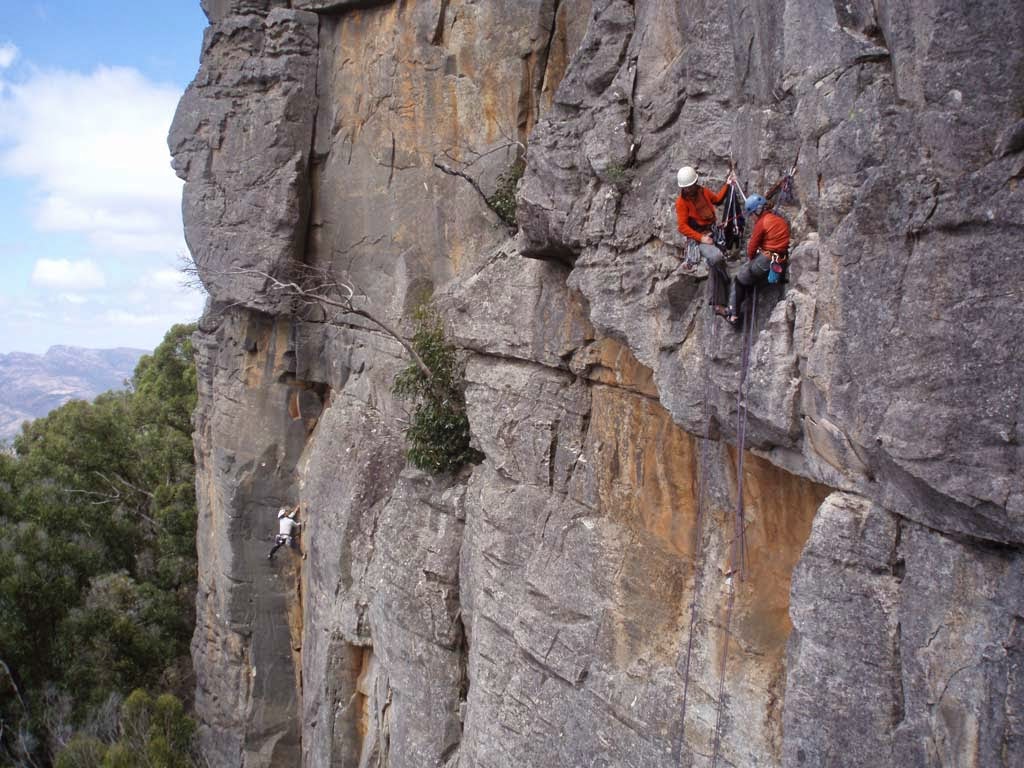 We actually went to do it several years ago but there was someone already en route, so we climbed the wonderful Heretic, a five-pitch route nearby, instead. The description says, "Climbs don't come any better than this." I'd agree. It's steep all the way and quite varied. Here's a photo of Di abut two-thirds of the way up the first pitch ... 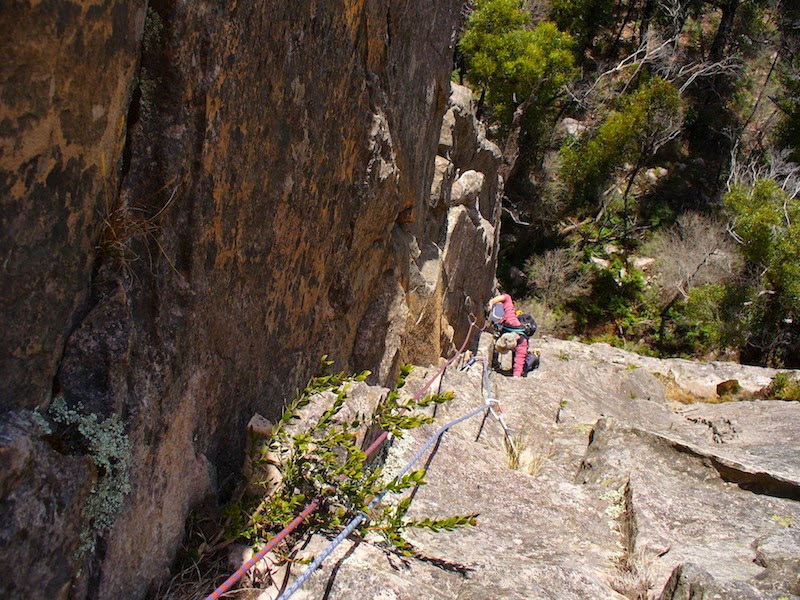 ... another of her approaching the first belay ... 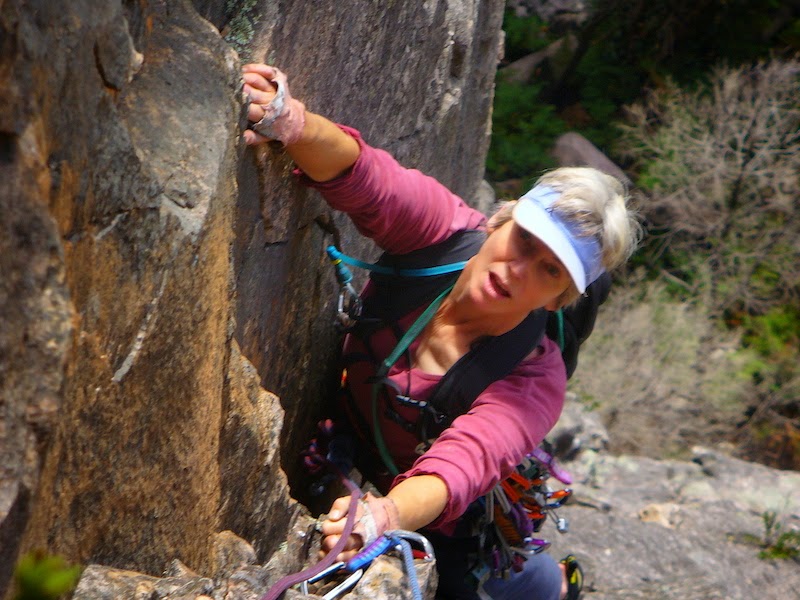 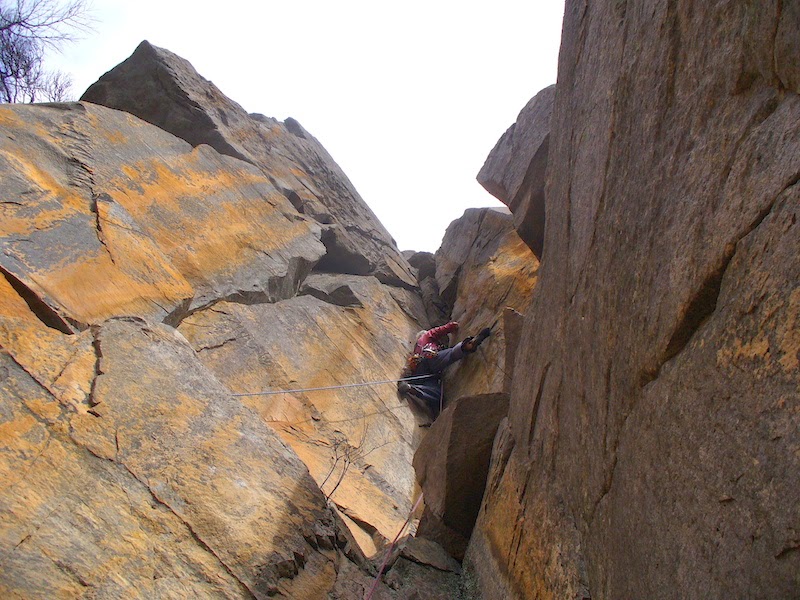 But that's all ancient history now. Time to start looking ahead.

I've got a six week period of having to wear a cast and avoid putting any weight on my left foot. That will be followed by a six week period in a boot, which will be gradually adjusted to stretch my Achilles tendon. So I won't be very mobile for about three months.

In light of the situation, we've decided to re-jig the year. We had booked the ferry for a five week climbing trip to Western Victoria - including the aforementioned Grampians and Mt Arapiles - from the beginning of March, then intended to have a long trip to Canada and some of the northwestern states in USA during the middle of the year, with a possible side trip for some hiking with friends in France. Hopes and dreams ...

It is clear that I won't be able to climb for most of the year, so those hopes have been discarded. There's no point in going to the Grampians and Arapiles if you can't climb, and we aren't interested in driving around Canada sight-seeing; we want to be active in the environment, climbing, hiking and cycling.

So as not to lose a significant amount of our fares, the ferry trip has been rearranged for October/November. Springtime at Arapiles doing lots of easy classics to get back in the groove. Sound wonderful. Maybe if things go well enough we might even be able to go to Rosea, but I'm not going to even think about that for the moment. North America has been put on the back burner for another year.

Strenuous hiking - especially up hills - is also likely to be delayed at least well into the second half of the year. A dismal prospect. However, an email from an old friend got us thinking that a long cycling trip could be a possibility. Dianne and I had already started thinking that much of our early physical activity would probably be bike-based, as I should be able to at least pedal on reasonably flat ground once I'm out of the boot. I will probably be able to get on a bike at the gym and start to rehab the muscles in my left leg and foot before I get out of the boot.

After my accident I got an email from my friend Steph Todd. Steph and her partner Peter have signed on for a long, supported ride along the south coast of Western Australia and on through the Nullarbor Plain, on to the coast again in South Australia and finishing in Gawler just outside Adelaide. It's a journey of about 3.400 kilometres and almost all through country that Dianne and I have talked about visiting but have not yet done so. (Dedicated cyclists, Steph and Pete are always off on their bikes doing interesting trips in interesting places.)

Steph wondered if we might be interested in such an undertaking. When we started investigating, we thought it would be just about perfect for our situation. We'd been thinking for a while we'd like to do another long cycle tour but weren't sure how we'd fit it in, especially the training that is required for this sort of event.

Further investigation led us to dream even bigger. We now hope to ride with cycleacrossoz.com all the way from Perth to Melbourne. The total distance will be about 4925 kilometres. Here's an image of our island continent with the route roughly sketched in using Google Maps (the total distance and route shown are not quite accurate as Google Maps will only allow a limited number of points to be entered) ... 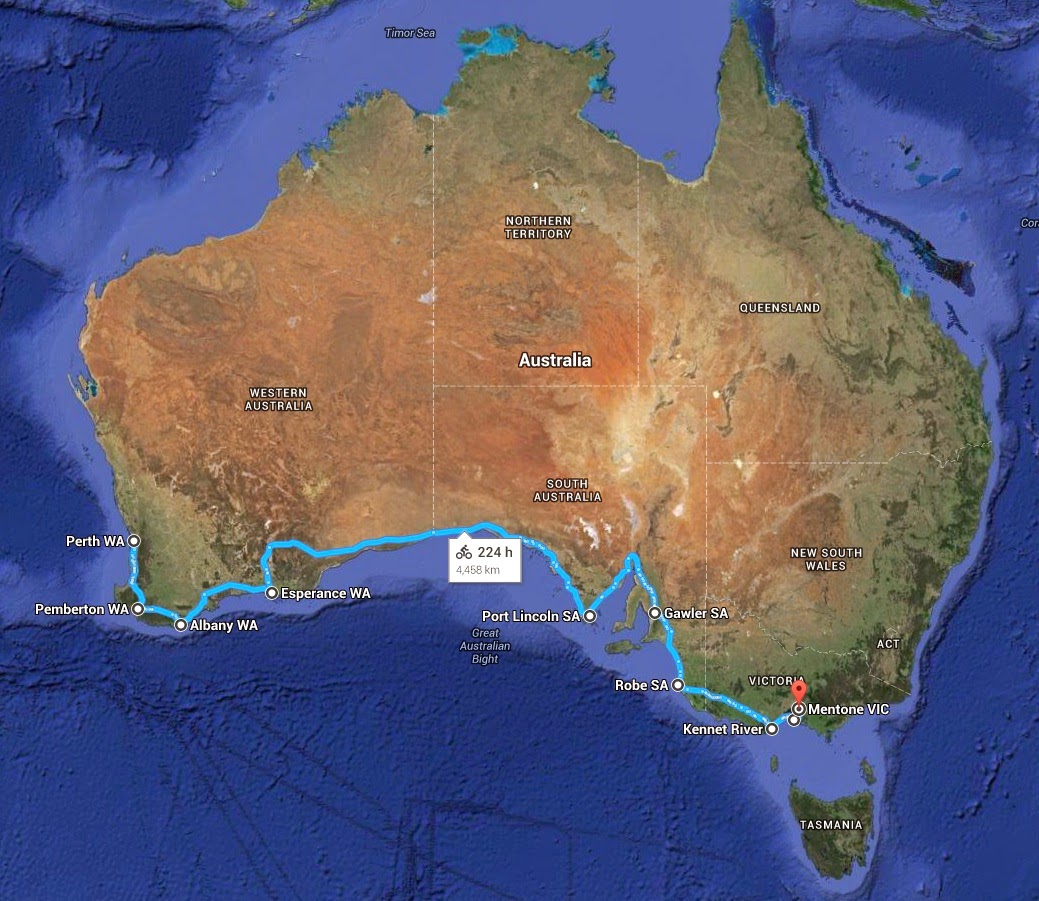 ... and a close-up of the southern half of the continent (you can zoom click on either of these images to get a better look) ...

Maybe you are interested??? If so, here's a detailed itinerary of the route. You might need to get in quick though. We've paid our deposit, and Collis says that this is proving to be the most popular of their legs in the big loop for 2015.

Di has already started her training so she'll be some way ahead of me when I am able to get back in the saddle. Please wish us luck: we might need it! WI'll keep you posted on how our training is going.

In the meantime, cheers for now ...