Sublime Cycling in the Valley of Love

The Weather Gods Smile On Us

Today was about as good as it gets - at least as far as winter in southern Tasmania goes. A look at the forecast suggested that it might be worth riding to New Norfolk and further up the Derwent Valley - and it was. Here's a photo of Di about 50 kilometres into today's ride ... 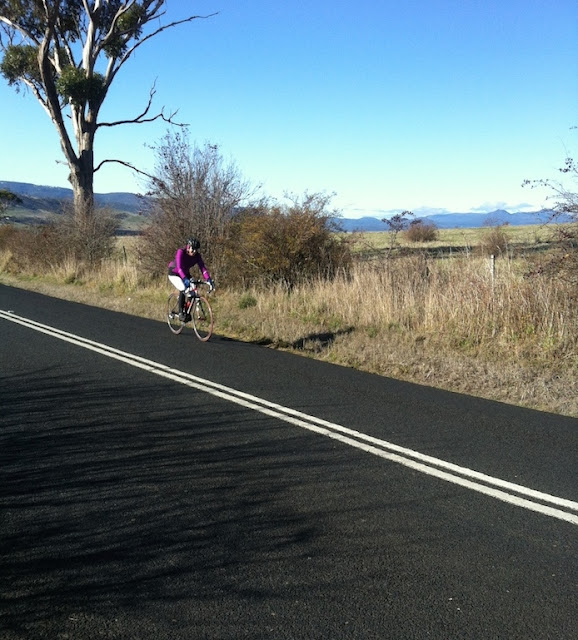 As you can see, she's all rugged up but, apart from a few wisps over the peaks in the distance, the skies are clear of clouds. The photo was taken just after midday, when the ambient temperature was about 12 degrees and the apparent temperature was around 10 degrees. That probably sounds a bit cold for most Australian cyclists, but if you ride year round in Tasmania this is just the sort of day you relish.

What made it so good of course was the lack of  two things: rain and wind! Unlike most days recently, the forecast was for zero percent chance of rain and very light west to nor'westerly winds. Of course this is Tasmania, so there is always some wind. Today was about as close as one gets to completely still conditions. And the forecast suggested that if we went as far as Bushy Park we'd be have whatever wind there was in our faces on the way out, but at our backs on the way home. Really, the light northerly air flow was, if anything too light to even call a breeze. On the way out is was akin to a sage spirit checking one's urge to overstep the mark; on the way home it was like a whisper of encouragement in one's ear to pedal, pedal, PEDAL!

These snapshots of observations in Hobart ... 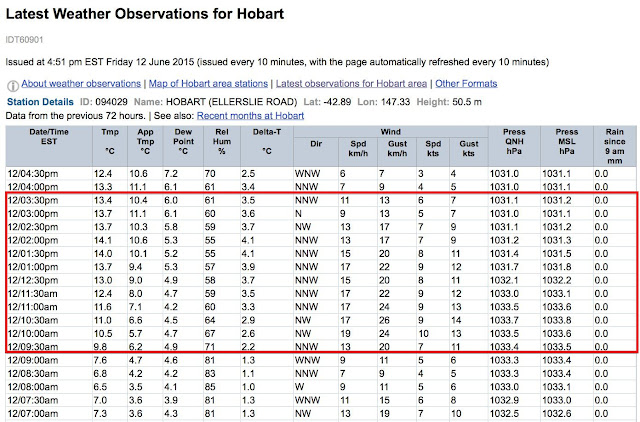 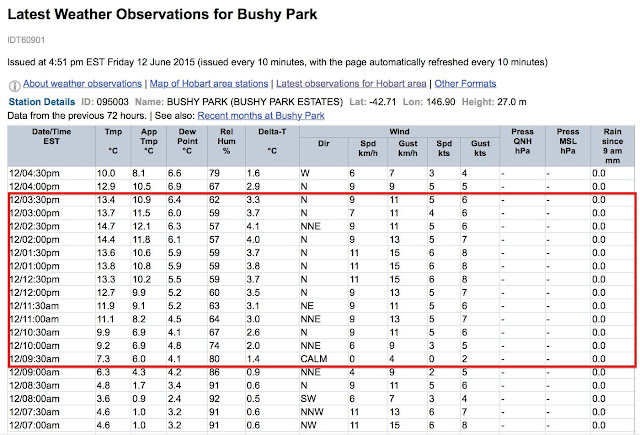 ... while we were out riding highlight how benign the conditions were.

(If you've been following the blog, you will have seen this part of the world before!)

Another (not so good) photo of Di just after we passed through Bushy Park shows the view across Glenora and on up towards Mt Field National Park ... 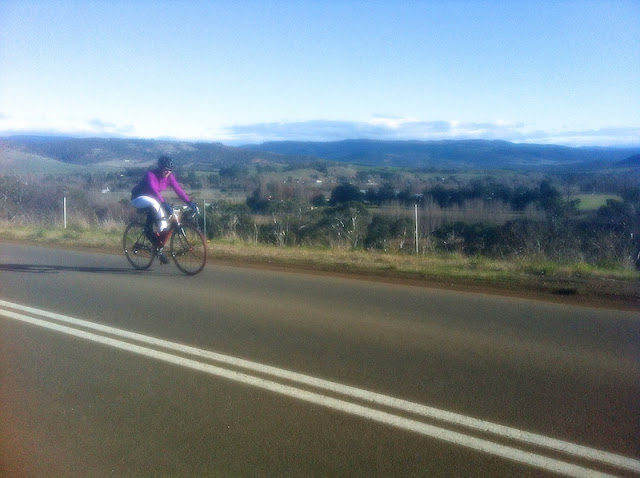 This part of Tasmania is hop heaven, hop central, the hop hotspot of Tasmania, with hops having been grown here for about the past 150 years.

And here's a photo that Di took from almost exactly the same spot on an earlier ride, looking down towards the River Derwent ... 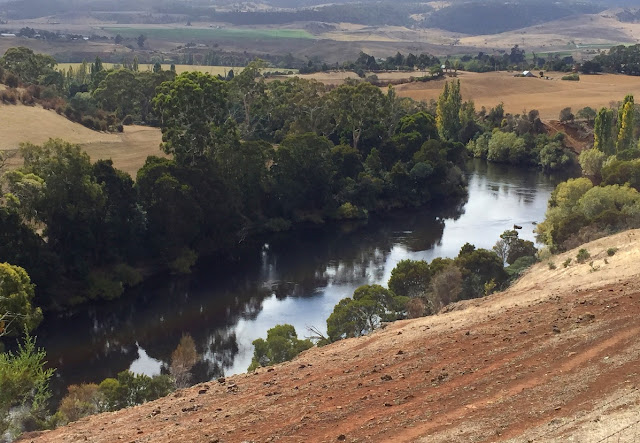 We didn't stop long enough to take any photos of the hop fields. Mostly, when we're up this way our stops are at Banjo's Bakehouse in New Norfolk!

The Valley of Love?!?

It's almost impossible to find anyone referring to the Derwent Valley/New Norfolk as "the Valley of Love" these days, but when I first fetched up in Tasmania you'd hear that phrase all the time. It was back in the halcyon days of the mighty Eagles, New Norfolk's football club, when they were battling the heavyweights of Glenorchy and Clarence in the now-defunct TANFL/TFL Statewide League. Wayne "Baldy" Fox was regularly booting over 100 goals in a season - he holds the record 135 sausage rolls. The iconic nature of the country footy club is reflected in the club song ...

There's a team on the track,Dressed in Red, White and Black,We are the mighty Eagle team.It takes a good team to stop us.A better one to wop us,And Hobart knows that's true.If the Magpies ever head us,We'll all come fighting back.For we're fighting for our colours,The old Red, White and Black.Down the 'Roos and the 'Gulls,And we'll bust the 'Robins skulls.We are the mighty Eagle team.

In case you missed it - or aren't from Australia, it's after the classic colonial song "The Road to Gundagai".

Anyway, the Boyer Oval was a fortress for the mighty Eagles, especially mid-winter when it might be a bit foggy alongside the river and significantly colder than Hobart down by the seaside. The footy club really united the town and the district as a whole. Back in the day, when country football was the lifeblood of the local community and a home game attracted thousands of fans, and the ABC broadcast the game of the round on the tele - and posted regular updates - from the other matches - New Norfolk became a mythical place each Saturday afternoon. Was that the reason the Derwent Valley in general and New Norfolk in particular was known as The Valley of Love? Or was it something else? This was one of the things spinning around in my head as I cycled through the township today. I'd love to know the answer if there's anyone out there who can help me out ...
Posted by Doug at 7:51 pm No comments: