This probably seems like a pretty strange heading. Well, just recently my friend Jon sent me a video. Apart from being a beautiful presentation of Yellowstone National Park, this video explores the concept of trophic cascade and how the reintroduction of wolves have revitalised the environmental values of the park. You've just got to see this ...

Beautiful, eh! However, some wolf ecologists have cautioned against giving wolves all the credit for the resurgence in plant and animal diversity across Yellowstone, which makes perfect sense. This article suggests that a number of other factors have made significant contributions to Yellowstone's rebirth. Whatever the role they've played it seems clear that the reintroduction of wolves (thanks need to go to the Canadians for supplying the wolves) into Yellowstone has been a real good news story.

The story got me wondering about the phenomenon of trophic cascade generally. It's a pretty interesting concept, raising lots of questions about the balance in nature. For example ...

Now that does seem like mumbo jumbo, doesn't it? Well, I've got another little video for you. Even if you don't buy into the science, enjoy this amazing vision starting with a close-up image of a humpback's eye ...

Don't you just love that faecal plume! It seems that whale poo makes an invaluable contribution to the ecological health of the world's oceans - and, of course, thereby the health of the planet as a whole. This alone seems reason enough for Japanese to stop killing whales.

Which brings me to look at this issue from the point of view of a Japanese pro whale-slaughter proponent. One argument put for whaling is that it is part of traditional Japanese life. Hmmm. Apparently, a 2006 study showed that 95% of Japanese don't eat whale meat. And
I don't think sailing halfway around the world in huge ships, burning countless tons of fossil fuel to cart a few whales home which sit uneaten in freezer warehouses quite fits that bill either.

Another argument is that the Japanese support whaling. Well, a poll conducted by the Nippon Research Centre suggests that 71% of Japanese do not support whaling, so there goes that claim.

Japan says that we Australians should be the last to criticise them killing whales when we are increasingly slaughtering kangaroos and wallabies. This was one point of view explored with friends last night over the dinner table (along with some hearty winter food and a few bottles of red). On the surface, quite a reasonable-sounding argument. And, tragically, some sub-species of kangaroo and wallaby have gone extinct due to hunting and destruction of habitat. We need to do what we can to protect endangered populations.

However, overall kangaroo and wallaby numbers are at all-time high levels due to conversion of wild land to agriculture. In a nutshell, farmers grow crops and the natural herbivores in our environment eat and multiply to plague proportions.
Except Victoria, all mainland states harvest kangaroo commercially, which helps keep populations from exploding. In Tasmania, it appears that  the systematic culling of wallabies keeps the population at a stable and sustainable level, while our only kangaroo, the Forester, is protected. (I'd be interested in your opinions on this issue if you'd like to leave a comment at the end of the post.)

Anyway, back to the whales. If you watch this next video - which is of a whale being liberated from a gill net in the Gulf of Cortez - you'll see some fantastic footage of it celebrating its freedom ... a truly heartwarming story:

If you believe media reports, shark attacks in Australia would seem to be on the rise. This may or may not be true. In any case the chance of an encounter with a shark remains extremely unlikely.  (Since records began in 1791, fewer than 1000 attacks have been recorded, with roughly one-quarter of those proving fatal.) Nonetheless, the Western Australian government reacted hysterically last year to a couple of attacks in WA by introducing a controversial culling program, which was dumped when the Environmental Protection Agency recommended its cessation.

As it turns out, even sharks make positive contribution to the environment. This video explores how sharks in the wonderful, Western Australia World Heritage Area (try saying that quickly three times!) of Shark Bay influence patterns of seagrass growth, ensuring that good dense banks of seagrass survive and provide nutrients.

Anyway, the sun is shining and the Bridgewater Jerry has finally burnt off so it's time to get on the bike, where I'll contemplate these wonders of our natural world as I ride along.

The following is, admittedly, a bit clichéd, but being all touchy-feely, I felt like sticking it in anyway as I thought it fit nicely with the theme of this post.

We were out on a walk, doing a bit of rehab for my ankle this arvo when I spotted a sign outside a shop that said ....


If you want the rainbow
you've got to put up with the rain!

With the forecast for the next couple of days (wet, windy - maximum windy - and cold) not very inspiring for cycling we saw a window for getting out this morning before things really blew up. Just a short spin out to Granton and back, but better than nothing. We slogged out into a steady northerly and just about reached the turnaround point before the first of the major gusts came into play. It hasn't rained yet, but boy-oh-by has it got windy. Thankfully we were home again before the worst of it, but did cop some blasts up into the 60+ km/h range. It has gusted to over 100 km/h since then and is gusting in the 90's as I write this. Here's a look at what we've had so far today: 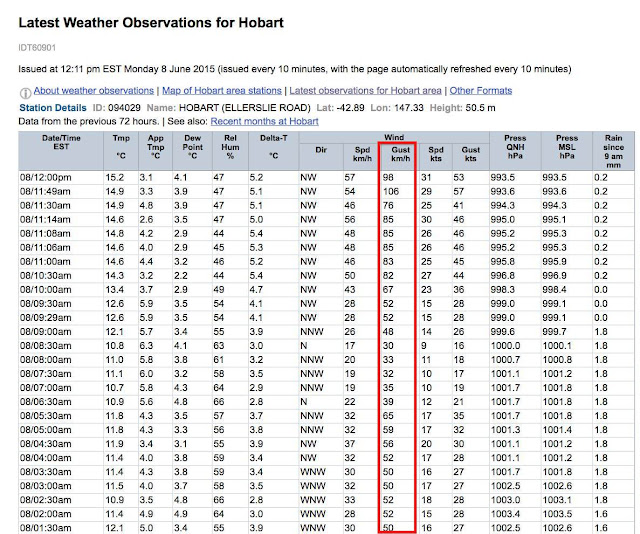 Sure glad to be home and snug. Besides, the bikes are overdue for some much-needed maintenance after a week of variable conditions. Better get to it!
Posted by Doug at 11:21 am No comments: