The Definition of Duplicity and More on Climate Change

Who is Greg Hunt?


Anyone outside Australia probably hasn't heard of him. Most people in Australia probably don't know who he is either. In fact Greg Hunt was probably higher profile when he was part of the Federal Opposition than he is now. It was easy to slag off as an opposition spokesman on the environment. Now, as Minister for the Environment (with the current government's stance on the environment and climate change, that would make him a junior minister) he has become almost invisible. What can now be revealed is that he is the definition of duplicity. If this wasn't previously patently obvious to all and sundry, it certainly should be now.

It has emerged that Greg Hunt was given a thorough briefing on climate change,its affects on weather patterns and the increased likelihood of severe bushfires by senior personnel at the Australian Bureau of Meteorology three weeks before he gave an interview citing Wikipedia on the topic. His responses in the interview were deliberately formulated to suggest that he had no information that points to an increased likelihood of bushfires or an increase in severity of bushfires due to climate change. But if you read the article, that is clearly not. It is also clear that Greg Hunt has deliberately misled the interviewer and the audience. And that to me is the definition of duplicity. When he was in opposition, we knew he was wasn't interested in listening to experts about climate; now we know he will deliberately ignore facts that are presented to him in his capacity as our government leader responsible for dealing with environmental issues.

A Subtle  Hint the Climate is Changing

For anyone living in southeast Australia who has their eyes open, it is clear that the climate is changing. We can see that now in many ways. The change in the bushfire season and the intensity of fires is one, but there are other, more subtle changes that have occurred over time.

A place we've visited many times for over three decades is Risdon Brook Dam. It's not especially scenic or especially interesting but it is a very pleasant place to recreate. We probably first went there with the kids when we were doing a bit of orienteering. It was fun exploring the bush and finding hidden controls with them. The 4.25 kilometre dirt track that loops around the dam undulates nicely so we started going there to run (that was back in the days before "joint issues" were not even in our lexicon, let alone being part of everyday life). We've also used it as a base for mountain biking and hiking to nearby landmarks.

In our early visits to the dam we'd regularly see Yellow-tailed Black Cockatoos foraging amongst the pine trees and feasting on cones.  These quirky birds are probably our favourites and it was always such a delight to come across them squawking and skiting as we wound away around the dam. I'll indulge myself with a video to share with you ...

We only saw black cockatoos, no white cockatoos. then slowly, almost imperceptibly, Sulphur-crested Cockatoos started to appear. "So what?", you might well ask. Well, the so what is that they just weren't a common sight around southern Tasmania, certainly not in any bush environment. We'd regularly see white cockatoos in northern Tasmania. In fact, the defining moment of arriving in northern Tasmania along the Midland Highway was driving through the paddocks just north of Epping Forest and being greeted, invariably, by flocks of Sulphur-crested Cockatoos.

Once the Sulphur-crested Cockatoos - which, unlike our favourites, tend to flock in large numbers - started frequenting Risdon Brook Dam, the numbers of Yellow-tailed Black Cockatoos diminished. The Sulphur-Crested Cockatoo is an aggressive bird that tends to drive out competitors. The notable thing about their presence in this particular place is that they generally frequent agricultural areas, where they like to forage on the ground for grubs and the like. We do still see the Yellow-tail out there, just not with the same regularity. So, that is one little example of how things have changed over time here in southern Tasmania. Scientifically significant? Who knows.

Past Climate Change Events vs the Here and Now

I've just been looking at this great article from NASA that touches on the fact that there have been seven major climate change events over the past 650 000 years, as reflected through cycles of glacial advancement and retreat. he last of these cycles finished 7000 years ago, since which time human civilisation has emerged and developed. Most of these variations in climate can be attributed to minute variations in the Earth's orbit, which alters the amount of solar radiation that the Earth receives. Some short term changes in climate are thought to be due to factors such as volcanic eruptions. It seems that a major change of climate 65 000 000 years ago caused the extinction of dinosaurs, but scientists have no definite answer as to what caused it. Their two camps are split between whether it was a massive asteroid that hit the earth or a massive period of volcanism. Whatever, it must have been massive!

Nobody suggests that any previous change in climate has been the result of human activity. That all changed when we started building machines and factories in the mid 19th century, factories that have been pumping carbon into the atmosphere since the beginning of the Industrial Revolution.

The following graphic from that article shows the last 400 000 years, with levels of atmospheric Carbon Dioxide coinciding with Ice Ages and also a shocking spike at the end ...

The blip at the end can only be attributed to industrial activity. One thing that is undisputed even by climate change deniers is that atmospheric carbon dioxide traps heat, so it's hard to see how human activity couldn't have at least had some influence on the raising of the average temperature around the globe, both on land and in the sea.

Little of this would be news to most of you. What might come as a surprise though is that scientists who understand climate change assert that many change events have happened quite quickly, over a period of between a few years and a decade. No doubt such rapid change comes as something of a shock - maybe not as bad as being hit by a tsunami, but maybe not that far off it.

The End of the Medieval Warm Period

You are probably wondering what has led to my current preoccupation with climate change. I'll tell you. Before we went off hiking and climbing in France I started reading a fantastic book called The Third Horseman: Climate Change and the Great Famine of the 14th Century. It's by William Rosen author of Justinian's Flea and The Most Powerful Idea in the World. All three books deal with important phases in western civilisation. This is the cover of the Third Horseman: 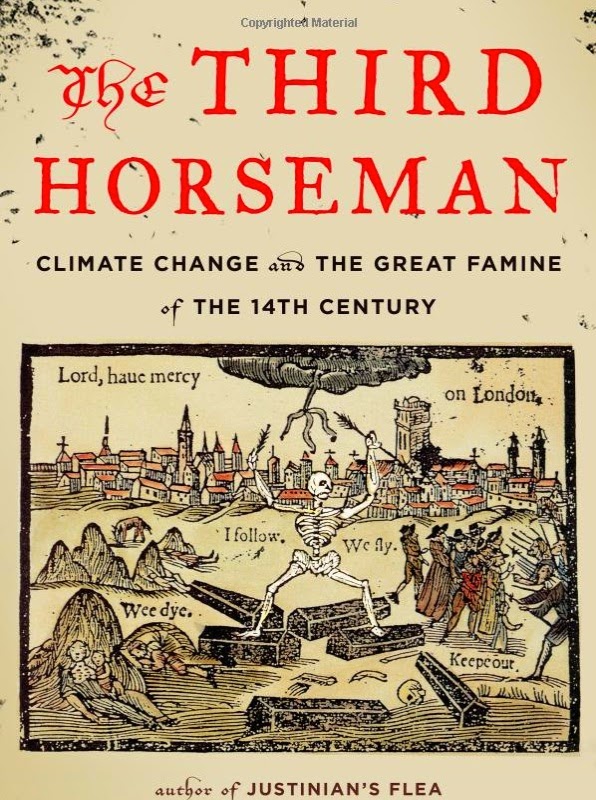 Doesn't it intrigue though! I've been working my way through the book and I must say it's a wonderful read. While it is incredibly wide-ranging, the essence of the book is that it deals with the complex array of factors that led to the Great Famine that killed one in eight people across Europe. What is clear so far is that climate change - and it was very sudden (it started raining on the 15th of May and didn't stop anywhere in Europe until August) - played a significant part in that famine. There's so much going on in The Third Horseman that it's small bites at a time, but it's a book that's inspired me. The point, though, is that climate change didn't just creep up on Europe in the early 14th century it hit with a BANG! The same thing could happen here, but people like Greg Hunt make their living by denying there is any sort of problem.

I thought it might be good to finish this little ramble on a light-hearted note. Here's something that I think you'll enjoy - unless you are in the climate change deniers camp ...