They don't have baking powder in France .... 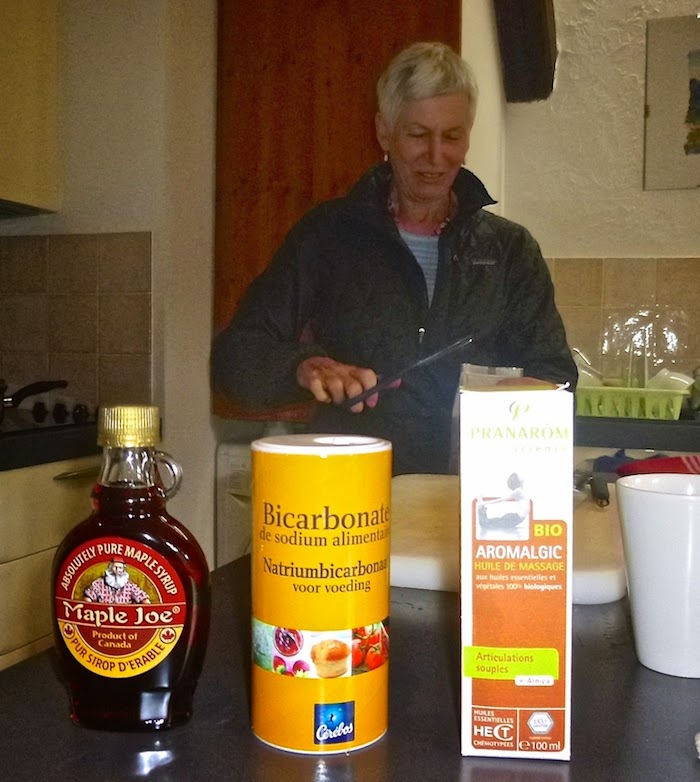 When we did our first grocery shop the other day we spied Maple Syrup and had to have it so we could make pancakes on the occasional morning when we aren't racing off to the crag. (Note: Maple Joe from oh... Canada!) Couldn't find any Baking Powder at the time so we left it for the moment. We were back to get a few more things today and scoured the supermarket and still couldn't find Baking Powder: conclusion, they just don't have it. What they do have is Baking Soda ("What's the difference ?" you ask ... I answer), and the only size is this mega-packet, so that's what we've got. It says on the container that they use it for "Patisseries ... Pour bien faire lever la pâte: use cuillière à café pour 500 g de farine". Sounds about right.
The other thing featuring prominently in the photo is some massage oil for sore muscles which are starting to present. In the background, Di is snipping open a packet of  walnuts to go in the salad she is making for dinner. We've rediscovered that the French are big on nuts in salads, especially walnuts (noix) and hazelnuts (noisettes).

After a couple of more energetic day, today was a relaxed day. We drove around a bit, had lunch out (very nice gigot d'agneau, but maybe not as good as our home-grown Tasmanian lamb), did some shopping - Di has a very fancy new pair of climbing pants - then came home for an afternoon of reading and looking at the guide book in search of tomorrow's agenda. We've set out a game plan; hopefully the weather will co-operate.

Yesterday was a good day out. We went to the main rock climbing area in the Dauphiné area of the Alps de Sud, a place called Ailefroide. After just a little bit of to-ing and fro-ing we found the cliff we were looking for and the climb we wanted to do. Not too bad for a first visit to a relatively large area. We had chosen a route called "La Cocarde", a very popular climb and one the guidebook describes as "simply spectacular climbing".

Here is a photo that shows the route, obviously very foreshortened so the traversing isn't as significant as it looks ... 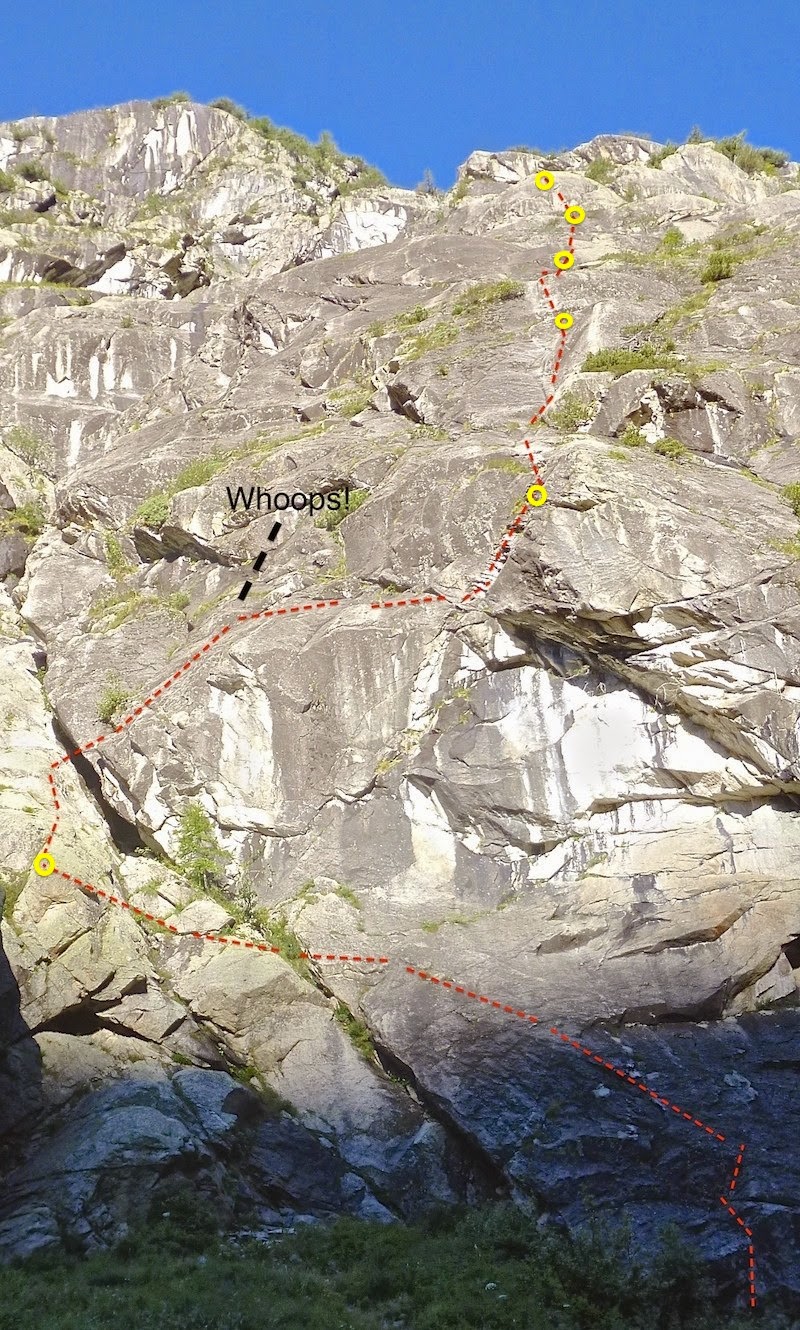 Pleased to have found the route we were looking for, we geared up just as the bottom of the cliff came into the sun ... 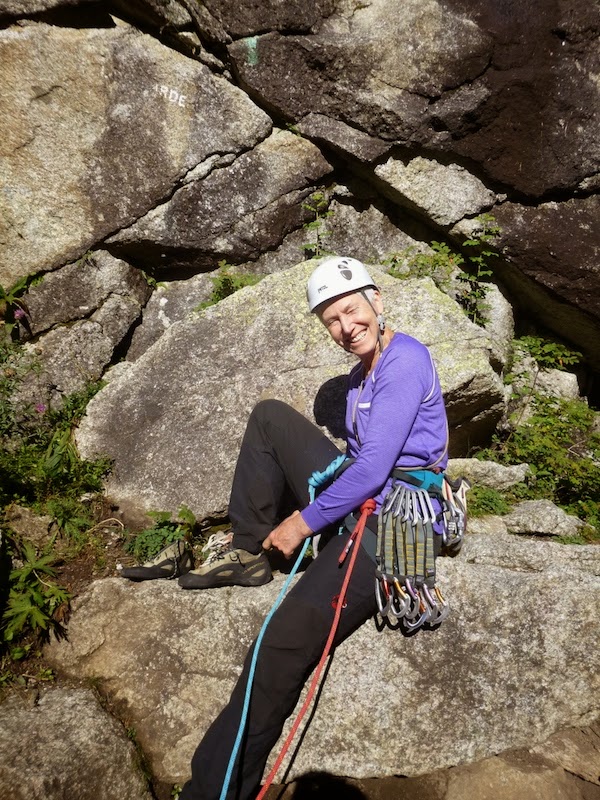 Di led the first pitch and here she is at the belay ... 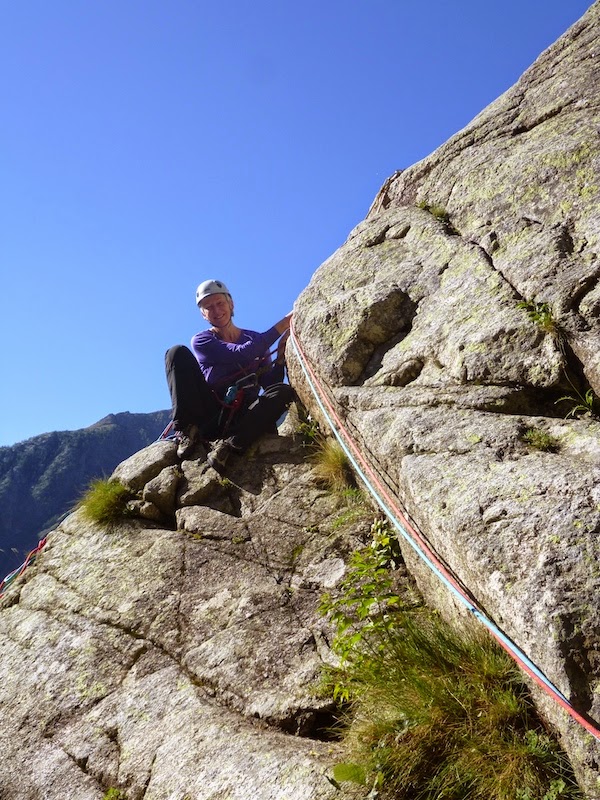 Did you notice the short black dotted line and the "Whoops!" on the photo showing the route? Although I was looking hard for bolts to follow I inadvertently headed up to an incorrect anchor, which turned out to be merely a rappel station. As I was bringing Di up to my position I noticed a line of bolts down and right (my left looking down) that I should have followed. In the next photo I've belayed Di down to the nearest of those bolts so she can regain the line, a traverse right before heading upwards ... 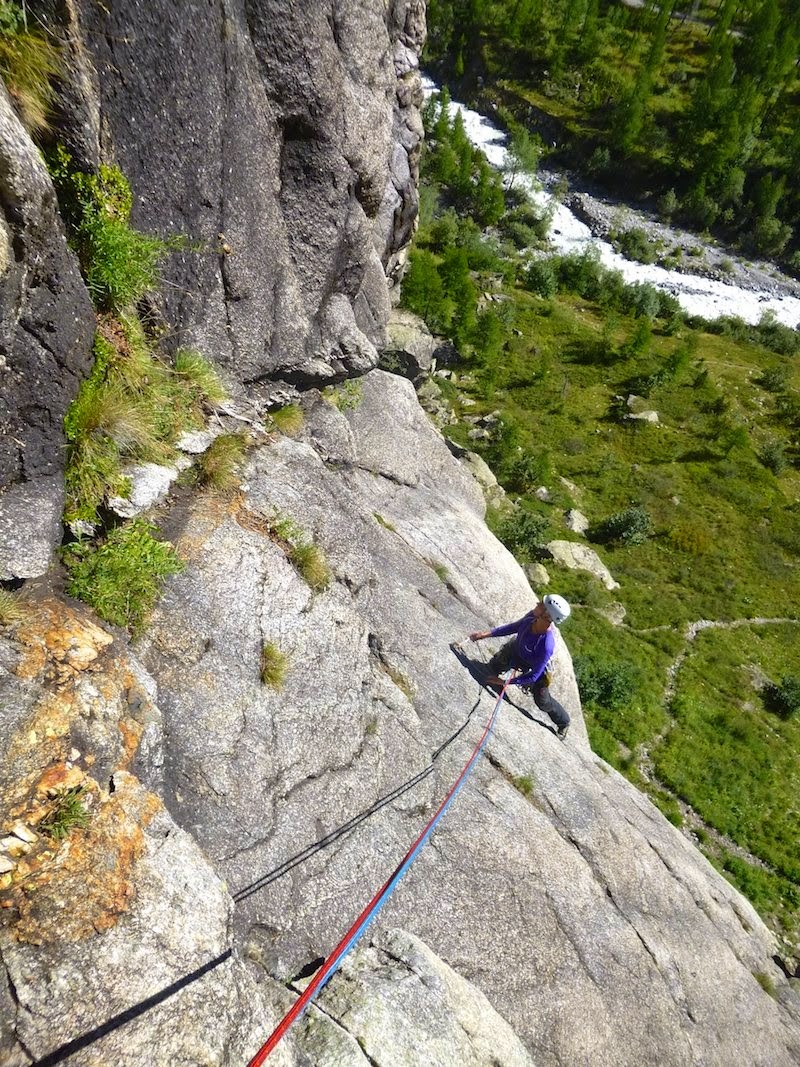 Once she had climbed across and up and put me on belay I tentatively followed: the climbing back down was easy but if I slipped there was nothing to stop me from taking a huge whipper. Back en route, we were delighted to have found the right way as the climb was a gem. Not hard but very enjoyable and about the right grade for us as we hadn't been on granite slabs for about two years.

Here's a photo of Di following me up the gorgeous long fifth pitch ... 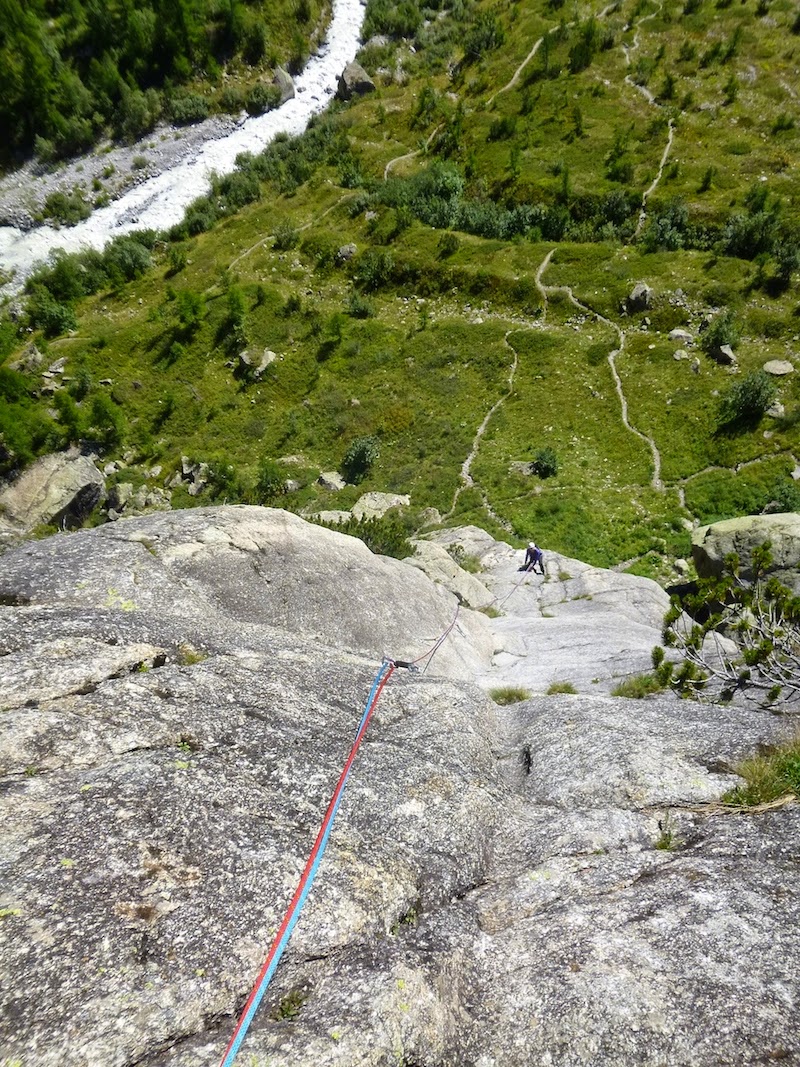 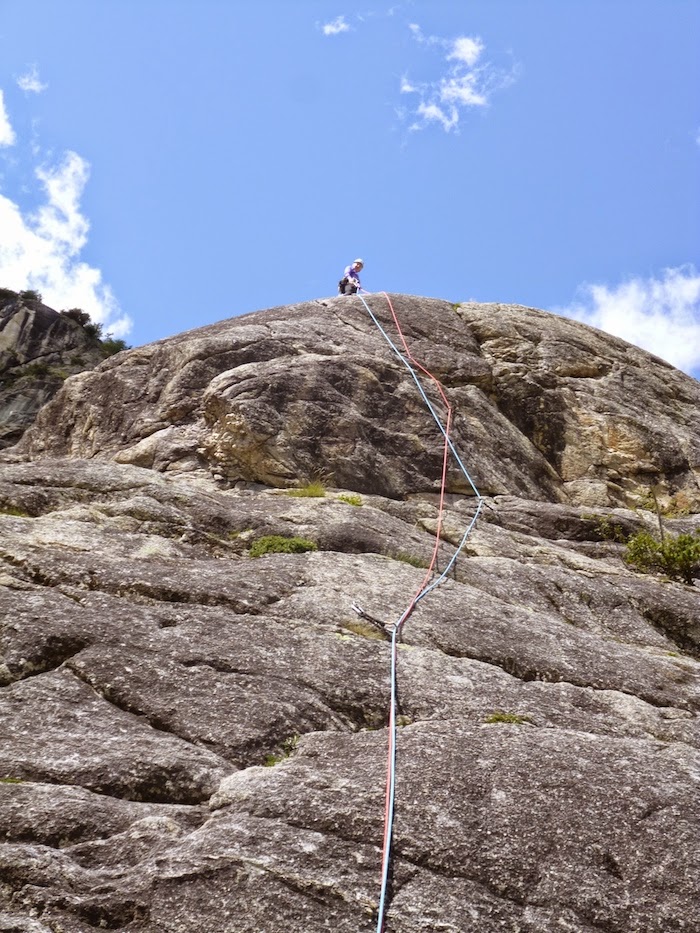 As you can see in the next photo, the views we enjoyed during the climb were fantastic ... 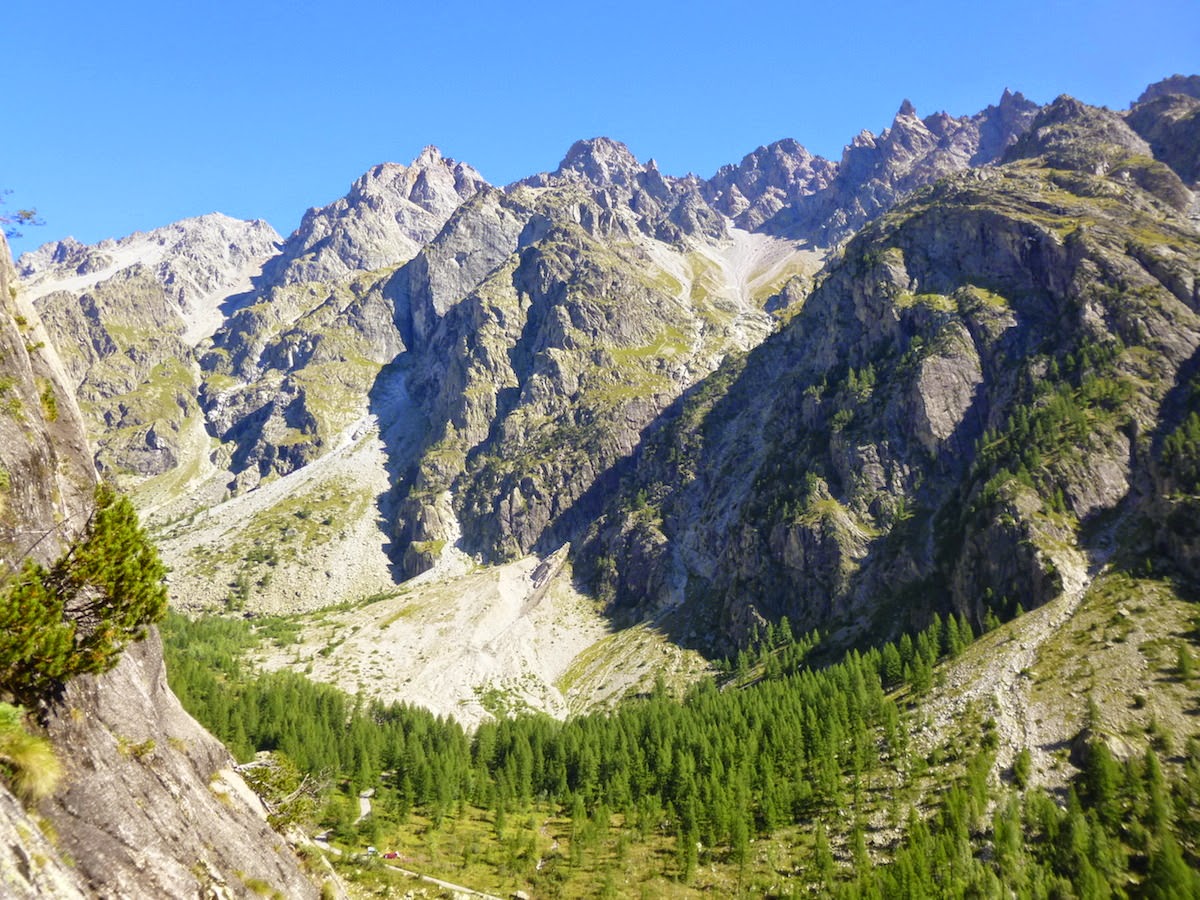 A couple of final notes on the route. The bolting is not quite "old school" but what I would describe as "sporty" and might test the nerves of someone just pushing up to that level.  Although not quite as clean, classy or hard as the wonderful "Crest Jewel" on North Dome in Yosemite Valley, the style of bolting was quite similar: pretty spaced in places but with the bolts where you needed them, and grouped where the level of difficulty was sustained. This added nicely to the sense of challenge and commitment on the route. I can see why it is so highly rated at the grade.
The other note is in regard to the name: we discovered "cocarde" stands for the French emblem of a tricolour rosette, and thereby represents those wonderful three maxims of French nationhood: liberté, égalité et fraternité.

The forecast does look good for tomorrow, so hopefully we'll have another great day out on the rock.