So, the folks at Woodbridge Fruit Trees were kind enough to  get my apple trees ready for pick-up late yesterday. They went in the ground this afternoon after it stopped raining. Using the KNNN method of espaliering, I've put them in at an angle and run the main stem along the bottom wire, being careful to gently bend the stem along the wire so as not to splinter it. Here's what they look like ...

From left to right, we've got a Cox's Orange Pippin, a Beauty of Bath and a Vista Bella. And in case you're wondering: no I didn't choose them because of their seductive-sounding names!
The folks at Woodbridge say that the Cox's "must be the world's most revered apple". I first encountered it when I was picking apples the year I arrived in Tasmania. Getting to eat Cox's straight off the tree was definitely the highlight of working on that orchard.
Beauty of Bath is "a very popular old apple from the southwest of England", with a "fairly sharp but sweet flavour and quite aromatic" Sounds perfect!. It is one of the earliest ripening apples and, if we're lucky, should be ready to pick  around Christmas.
Finally, Vista Bella. According to Nik and Steve down at Woodbridge it's "the best of the early apples ... smallish in size with a lovely perfumed crisp and juicy flesh".
All of these trees ripen early, which suits us as we like to escape to the big island to the north in the autumn and winter.

A couple of weeks ago I posted that our garlic was starting to emerge from the ground. I think it's all up now, braving the cold rain that's been falling on and off the last week or so. Here's what our crop of about 45 little spears currently looks like ...

Although just small at the moment they look pretty robust and well established to us.

We're excited about our trip away, but also about how things we've planted will look in the garden when we get home. Although it's not quite halfway through winter, the cherry tree, blueberry bushes and  jostaberry bush have all started to push out buds. The fig tree we put in last year looks like it's also starting to move, so it will be great to get home when the days are getting longer and things are starting to blossom. And won't it be great to pull all the weeds and dig up those sections of the garden I've been neglecting!

This will be the last post on this blog for a couple of months. You can keep track of what we're up to on the Not Just the Nullarbor blog.

I've had a sneak peak at the forecast for Perth and it looks like we could be in luck for our first three days of riding ...

... so we're optimistic about the start of our trip.

Cheers for now!
Posted by Doug at 4:57 pm No comments:

A Walk In The Snow

With the forecast for today being as bleak as it was, Di was over the moon when I said I was keen to do almost anything other than go for a bike ride. That's because it gave her a chance to drag me out for a walk in her favourite environment: the Tasmanian bush. Actually to be more specific, her favourite environment would be the Tasmanian high country, but we aren't far off it when we are walking on the slopes of Mount Wellington, which is what we did today.

We only had a short stroll along the Springs to Lenah Valley Track as far as Junction Cabin and then back again, but enjoyed the infrequent pleasure of walking for a good deal of the time in the snow. Here's a photo of us just setting off ... 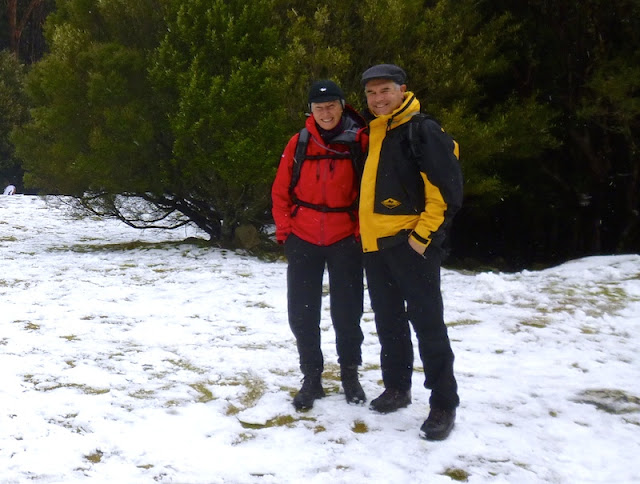 Granted, there was not a lot of snow about but it was falling. And there were lots of families milling around at The Springs building snowmen and throwing snowballs and generally having fun.

I took this photo of Di walking along the track ... 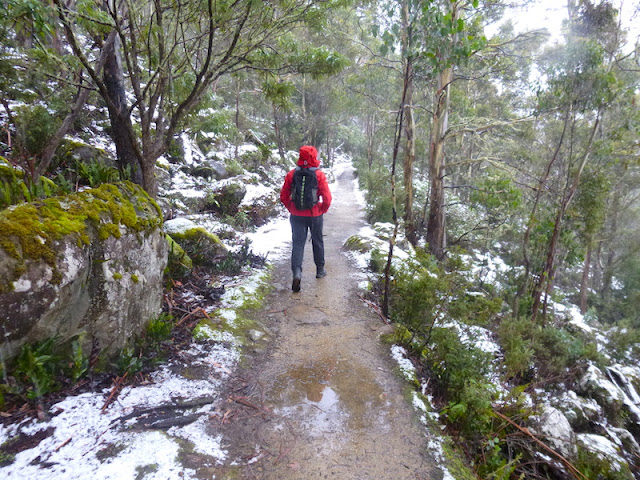 ... and she shot this little video of me catching her up ...

Unfortunately, when we arrived at Junction Cabin we found that some folks had left a bit of rubbish behind ... 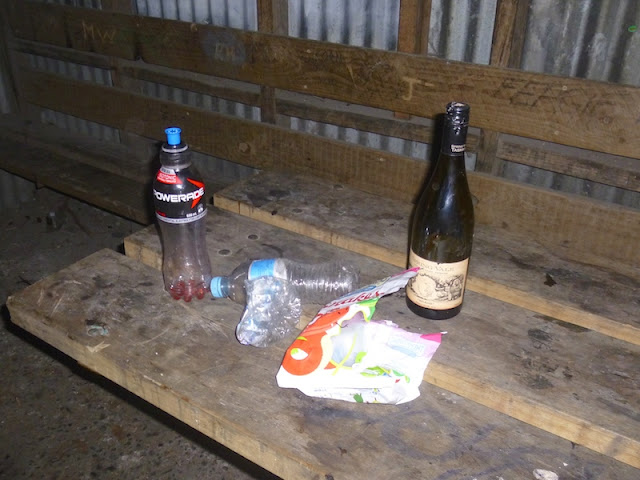 ... which I put in my pack and  took home for recycling.

I have a hard time understanding why people would want to walk in such a lovely place only to trash it by leaving their garbage behind.

It's about a 6 ½ or 7 kilometre return trip from the Springs to Junction Cabin. You can do a longer loop by continuing on the Hunter Track towards The Chalet and then return via the Organ Pipes Track. Highly recommended, and the latter part of this circuit is the first in the list of the 60 Great Short Walks in Tasmania.

On the way back we met a family with three children on their way to Rock Cabin, who were all carrying big lumps of snow. I think maybe they were planning on constructing a snowman when they arrived. More people out enjoying the simple pleasure of interacting with the natural environment. There should be more of it. As David Attenborough said to Barak Obama the other day, with over half of the world's population living in urban environments, if they have no connection with the natural environment they have no reason to value it. And therein lies doom for us all.

Maybe we should all try to get more people connected intimately with this beautiful planet we live on. So, here's a plug from me: on our way back to the Springs we also had a flock of currawongs fly past and serenade us. The currawong is a wonderfully vocal bird with a lovely call. Here's a short video demonstrating the call that most Australians who know the currawong will recognise ...


However, the natural world is all about diversity, and Tasmanian has its own currawong, which is endemic to our wonderful state. Unlike the mainland variety, our currawong is generally only seen in the high country, and we reckon its sound is a bit more haunting than its mainland cousin. We adore hearing it when we're hiking in our mountains. Here's an example ...

Get out amongst it!
Posted by Doug at 4:15 pm No comments: