We have been hanging out to get on our bikes this week but either the weather wasn't that peachy or there were other things we had to do. Tuesday would have been a good day, but I had an offer to go climbing and Di really wanted to do a gym class so we missed the best opportunity since getting back from Cradle Mountain on Sunday.

This morning didn't look great, with blustery wind and intermittent showers falling. The forecast suggested things would improve slightly this afternoon and we were pretty keen to get out so got our gear on and set off mid afternoon. It was a toss-up whether to go out and do some sprint training or see if we could ride up kunanyi/Mount Wellington. The mountain was just too big a lure after recently riding up Mount Buffalo in Victoria. We knew it was going to be pretty cool by the time we reached the summit so we dressed warmly and took an extra top to put on for the descent.

It has been a long time since we've ridden to the summit of our beautiful mountain. According to this site, the ride up Mt Wellington is the fourth hardest "hors catégorie" climb in Australia. (An hors catégorie climb is one where the product of the length of the climb (in metres) times the average gradient yields a product of 80,000 or more.) To ride up Mt Wellington from our place requires us to descend about 80 metres over a distance of a kilometre or so then climb about 1250 metres over a distance of about 21 kilometres, with an average gradient of just under 6%. The first half of the route is at a fairly moderate gradient, with the last half mostly at about 8 -  9%.

We knew we would be tested. As well as not being as fit as we'd like to be at this stage the conditions were a little worse than we anticipated. The ride proved to be fairly slow but we did reach the top and got an obliging tourist to take our photo ... 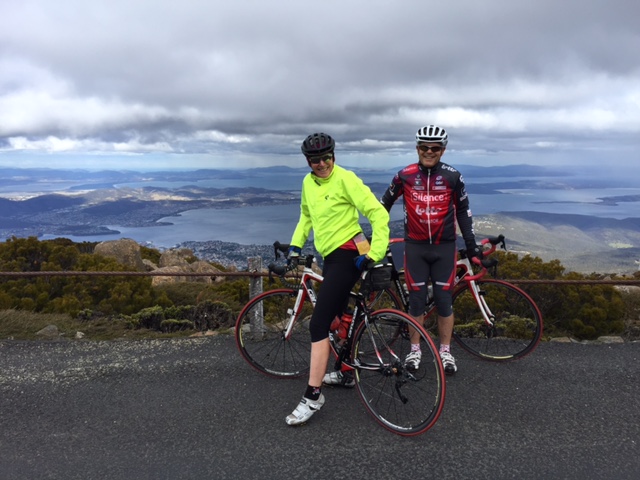 Thanks to Google Earth I can share with you a look at the route ... 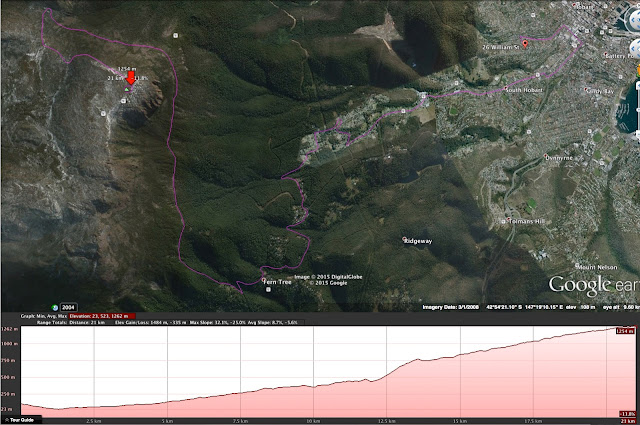 As you can see it's quite a convoluted route with panoramic views along the way - not that either of us were in any condition to be gazing at the scenery. Maybe next time ... or the time after that ... or ...

We didn't linger at the top. It was sometime between 4:30 and 5:00 p.m. when we got there. This extract from the Bureau of Meteorology's website will show why ... 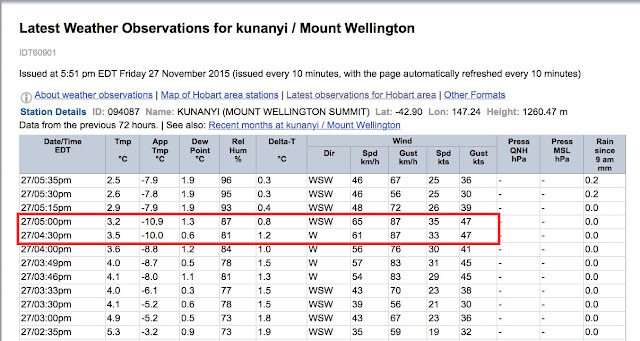 As you can see, it was both a little chilly and rather windy and there was an ugly looking cloud with rain coming out of it moving towards us, so down the mountain we went.

It was great to be back on our bikes but we were happy to get into the bath and thaw out once we got home. Maybe next time it'll be a bit warmer!