In Praise of Birds

I've just come across a wonderful personal perspective in the Guardian by Booker Prize winning author Richard Flanagan on the rich quirkiness of our native birdlife here in Tasmania. As one would expect, it's wonderfully written but of "inconsolable sadness", detailing the gradual disappearance of a number of species. A pet peeve of mine for a long time has been our inability - or unwillingness - to collectively control our cat population so that they don't threaten our more vulnerable native birds.
In his article, Flanagan details the birds that frequent the habitat around his shack on Bruny Island, an idyllic escape south of Hobart. It's a great little read and another perspective on the affect we are having on the planet, which I commend to you.

My favourite bird is the Yellow-tailed Black Cockatoo. Our version here in Tasmania is slightly different from that found on the mainland, most notably (to me at least) is its endearing call, which makes me feel I am truly home when I hear it. It's also slightly bigger I believe than its mainland cousin. We occasionally hear and then see them passing overhead here in West Hobart, but almost every time we're out for a hike or a bike ride we'll hear them somewhere along the way.

After returning from our European cycling holiday with a month of winter left, and having a week to settle back into home life, I got back into my riding in a big way. Unfortunately, it appears that I may have picked up a virus either in Europe or on the way home. At one point I felt a bit flat for a few days but thought I was just tired. Following that I put in a big week of riding and a fairly strenuous hike. And then I came down to earth in a big way. I was experiencing severe pain and stiffness in my shoulders, armpits, groin and thighs.

To cut a long story short, a few days ago I was diagnosed with Polymyalgia Rheumatica. Not good news at all, but after weeks of suffering and not knowing what it was I can now at least move forward. Unfortunately, vigorous physical activity - which for me means riding my bike long and hard and, as Di's big European Hiking Extravaganza nears, increasingly long day hikes - won't be part of the agenda for a while. I find it rather ironic that I developed this condition only shortly after I committed to participating in a big ride at the end of November to raise money for men's health - which will require a fairly high level of fitness! -However, it appears, from research I've been conducting, moderate physical activity is a good thing. The important thing is to gradually build back towards a higher and more intense level of activity. The main treatment for this condition appears to be an extended course of corticosteroids, gradually reducing the dosage over time. I'm hoping to get more detail on this when I go back to see the Infectious Disease specialist next week, followed by a visit to my favourite Sports Medicine doctor. In the meantime it's a matter of devoting time to more sedate pleasures, including pottering about in the garden.

The Garden Bursts with Renewed Life


Although there are, no doubt, still some cold and wintry days ahead, Spring is now in full swing and our garden is certain proof of that. The fruit trees are starting to really kick on in response to increased sunshine hours and a general trend to warmer weather. Our first cherry blossom has appeared and the rest are no doubt far behind. (We've had some real problems with cherry slug the past few years and I hope I can keep them away this time around. Our cherry tree is a grafted one with two different varieties and it would be great to make the most of the harvest and protect the overall health of the tree.)

By contrast, the young nectarine we put in a couple of years ago has just about finished flowering and is coming strongly into leaf. 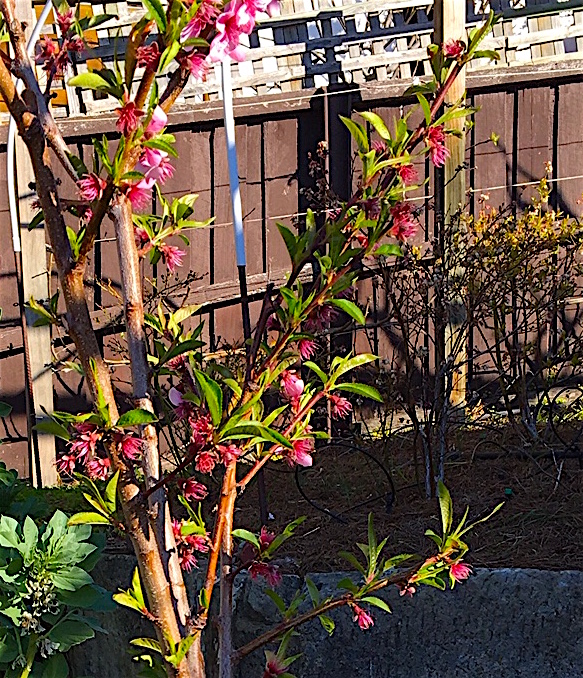 While it was in full bloom and before any of the leaves had emerged I counted over 150 blossoms. All these won't turn into viable fruit, and I will probably thin what fruit does develop, but things are certainly looking good for a tidy little harvest from this tree that is coming into its second year of production.

After struggling for years to try to get a lemon tree to grow in our yard we finally are having some success. We've got a Dwarf Meyer lemon that was covered with ripe fruit when we got back from Europe, and it seems to be making steady - if slow - progress. What is really exciting though is the vigour displayed by the other three newer citrus trees. A few years ago we put in a cumquat, which grew well but didn't bear any fruit for the first two years. It has now started to really take off. It had a baker's dozen nice ripe cumquats on it when we got home, which I promptly turned into a few jars of marmalade. There are now well over a hundred little cumquats coming on, and lots of new growth and flowers emerging which I am getting quietly excited about. I would have been happy just having the tree where it is, because it's quite pretty in its own right, but to have this unexpected bounty of fruit is a joy.

The other big surprise is what's happening with the blood orange tree that's been in the ground for a couple of years. There was a space that I wanted to fill with something green and lush, and, if possible productive as well. At my local nursery I spotted some blood oranges, which I wondered - or even seriously doubted - would produce fruit. However, the old hand I talked to was adamant that fruit would be forthcoming if the tree was situated in a sheltered sunny spot. It had a couple of oranges on it when I got it, which were so-so when they came off the tree a year ago. This year the tree has actually had seven oranges on it, two of which we've harvested. They too were "so-so" in terms of flavour and juiciness, but we've had quite an extended dry period. I've been putting more water on recently and will pull off the remaining fruit in the coming days. What is really heartening though is the massive amount of fresh growth that is surging forth, and numerous flowers that are forming.
Here is a look at that new growth, and a little peek at one of the oranges nestled into the foliage ...

A few years ago I put in an espalier frame and planted three heritage apple varieties. Here's an image that gives a glimpse of how they are progressing ...

They are just coming into flower ...

... and it's looking like we're going to have an encouraging harvest from these young trees - if I can keep the pests at bay.

Everything else is exploding into life too, especially the broad beans we put in about a month before we left for Europe ...

... which we planted a bit earlier than we normally do in the hope that our crop would develop a little earlier than usual. A smaller planting followed just before we went away, and our hope is that they will extend our cropping.

I'm going to harvest some rhubarb and silver beet shortly, in fact I think I'll duck out and do that now! Back in a second ... and here we are ...

... a few leaves of silver beet to have with dinner tonight, and several sticks of rhubarb to stew and have with yoghurt over the coming days.

It's just about time for me to put my feet up. I've had a walk into town with Di to do some jobs and come home via Salamanca. My darling spouse has stayed in town to attend today's School Strike for Climate. I would have like to participate but thought it might not be good to extend for so long the time I spent on my feet at this early stage of my recovery. Speaking of climate - and weather of course - I've just found Hobart's highest temperature recorded in September. It was 31.0 degrees C, set in 1987. we're not far off that record today: a few minutes ago we got to 27.1 and the wind is still blowing strongly from the north so the mercury might max out a little higher yet.  Given that the mean monthly maximum for September is 15.1, we are having a pretty darn hot day comparatively.

Anyway, Di has just got home so it's time we had lunch. She reports that a massive crowd was in attendance. Let's hope the politicians are taking note ...
Posted by Doug at 1:16 pm No comments:

Finishing On Top after an Interesting Year

Dianne and I have had a rather up and down year. The lowlight was definitely having to return home in early June after Di broke her back on  bike track in Ferrara, Italy.

After a long, slow and frustrating three months of being very careful with her back Di was able to get back in the saddle and slowly rebuild her fitness. Yesterday morning, the last day of the year, she decided she wanted to ride to the top of kunanyi/Mt Wellington. It's an "hors categorie" climb, and a lot longer than any other ascent nearby. I had been up to the summit a few times since we came home, but this would be the first time for Di since before we left for Europe. The good news is that she paced herself well and made it to the top without any dramas. It was a pretty good indication that she's pretty much over the terrible setback she had in Europe.


It was a beautiful day in southern Tasmania. We had a later start than usual, which meant that there was a lot of traffic on the road, both on the way up and on the descent. I had decided to take my video camera and see if I could get a bit of decent footage on the way back down, and recorded the journey as far as the Springs, where we pulled in for a late lunch. The amount of traffic made for a somewhat slower descent than usual but did lead to some fun manoeuvres and interesting footage ...

The best thing about getting this objective ticked is that it has restored Di's confidence that she can still get up the long hills and she is looking forward to our trip to the Victorian Alps at the end of January for some riding in the mountains with friends. Bring it on!