Drink your tea Toto: it's Voodoo Economics Time in Kansas!

Blogging again, inspired by a terrific article in today's online edition of The Age newspaper. There are strange goings-on in financial circles from Kansas to Canberra right down to tiny Tasmania, all driven by right-wing ideologues.

My tale starts in Kansas. Now, if you're of my generation and you hear that something's going on in Kansas two associations automatically spring to mind: the Wizard of Oz and tornadoes, colloquially known as "twisters".

I wonder how much of the folklore of Toto, Dorothy, the Tin Man, the Scarecrow, the Cowardly Lion and the wonderful, whimsical Wicked Witch of the West has permeated through modern culture. It was interesting to discover that friends in France who are about my age hadn't heard of The Wizard of Oz. However, if you go to YouTube and start a search, The Wizard of Oz pops up as a suggestion before a lot of more contemporary stuff.  When I started typing and got as far as "scenes from the W", The Wire (apparently Barak Obama's favourite TV show) was at the top of the list and The Wizard of Oz second so the story of Dorothy et al must really be well permeated through the English speaking world.

I also hadn't really thought about how old the story is, with the iconic movie version starring Judy Garland hitting the silver screen way back in 1939, based on the novel The Wonderful Wizard of Oz which appeared in 1900. The fact that I am even talking about this tells me that, shit: am I ever old! (On that score, if you ever want to access the full text of the story to read to your grandkids, it's available online here.)

It must have been something about growing up North America in the sixties, but I'm sure I would have seen that film at least half a dozen times on TV on dreary Sunday afternoons when the weather was too foul to be outside. So many iconic scenes come to mind, one of which is when Dorothy asks the Scarecrow what he would do if he had a brain ...


Brewing Up a Storm

Of course the Wizard of Oz starts its journey in Kansas, which is smack dab in the middle of "Tornado Alley" .. 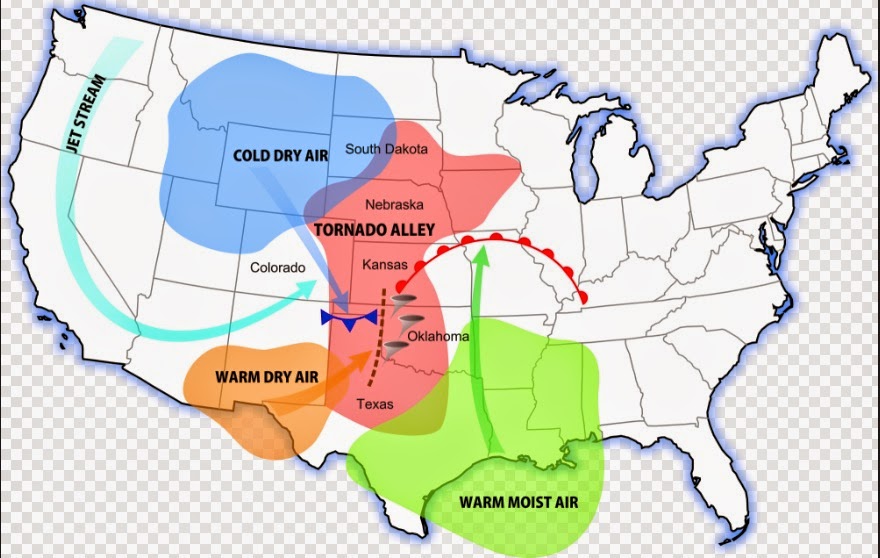 ... before Dorothy and Toto are transported to Oz by the tornado in that iconic scene where the footage of the twister coming closer to home base is fantastic in the way it builds tension ...

Now a storm of a different kind is brewing in Kansas. Amazingly, many leading Republicans in the state are turning against their reigning governor, Sam Brownback.

During his tenure of the past three years, Brownback has implemented policies dating back to the Regan administration of the 1980's by employing Regan's chief economist Arthur Laffer and bringing in bizarre policies that has devastated Kansas's economy. (Regan's application of Laffer's economic theories, which basically premise that the more you cut taxes the better for your economy, was subsequently described by George HW Bush as "voodoo economics".) Brownback, who is an ultra-right wing Republic has been strongly supported by the Tea Party movement and was swept to power in Kansas in the conservative backlash against Barak Obama (apparently a Muslim and born somewhere "foreign", if you believe the racists) during the 2010 midterm elections.

The Tea Party movement cites its inspiration as the so-called Boston Tea Party where American patriots rebelled against the idea of having taxes levied on them by the British. The event is widely regarded as a major catalyst for the American Revolution. You can have a look at the Tea Party movement's official website if you want to explore a weird mixture of right wing idealogical rants against anything that represents the current administration and indeed pretty much anything to do with taxation. And in Governor Sam Brownback they have found their darling.

Here are some examples of voodoo economic policies implemented by Brownback:
And some of the results:
So now a group calling itself Republicans for Kansas Values has emerged and is supporting the Democratic candidate who is opposing Brownback in the upcoming midterm elections.

Economics and The Abbott Government in Australia

So, what rings my bell about the right wing economic philosophy as it plays out in Kansas are the parallels in thinking we've got going on here in Australia with our current government. We have a Minister for Finance In Mathias Cormann, an ultra-Conservative who has a law degree from Belgium (unrecognised in Australia) with no economics or finance background, who worked his way up through the liberal party as a political staffer and got into parliament the easy way - yes, you've got it: preselection for the Senate. And then there's our Treasurer, Joe Hockey, who does have some background in financial affairs having worked briefly as a banking and finance lawyer - even though there seems to be nothing about financial planning and management in his background, followed by a brief stint as the Director of Policy to the Premier of New South Wales. Basically, another party hack promoted up the ranks. At least he was elected in his own right in the House of Representatives. He was just 31 when he entered parliament, so  probably spent six to eight years in the workforce. (One of the things we hear all the time in this country is criticism of the Labor Party for promoting party hacks; it looks pretty much the same on the other side of the fence to me.)

Hockey revealed his hand as an ultra-rightwinger in terms of economic philosophy back in 2012 even before he became Treasurer in a speech in London when he forecast an "end to the age of entitlement" in Australia. The two clowns in the photo above celebrated Hockey's first budget by puffing on panatelas ... 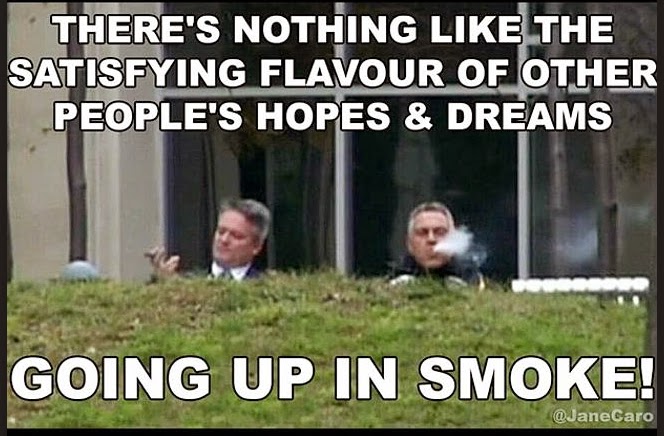 Here's one cartoonist's view of that episode ... 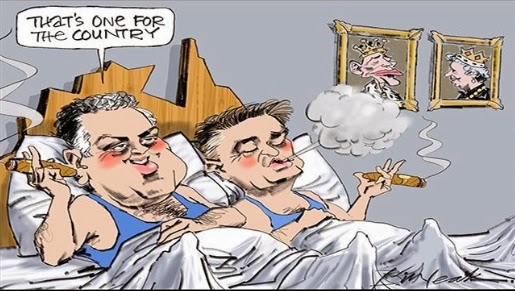 We've got our Prime Minister proclaiming that "coal is good for humanity" and the two buffoons above happily parroting him. And we've got the same collection of idiots stopping the push toward renewable energy. The latest casualty is the proposed wind farm on King Island, which would have supplied enough power for 240, 000 homes. The official line from the proponent, Hydro Tasmania, is that "changes in economic conditions" led to the project being shelved, and that possible changes in the Renewable Energy Targets weren't the main cause. It sounds like political tip-toeing to me, especially as we have a backward-looking government here in Tasmania, and the Hydro wouldn't want to get their political masters off-side.

Another masterstroke of stupidity from our current state government is their tearing up of the Tasmanian Forestry Agreement, which signalled a significant shift in the way logging was carried out in the state and brought to an end decades of acrimony between the environmental movement and the forest industry. They even want to resurrect the Tamar Valley Pulp Mill. My dear departed mate Bob McMahon would be well and truly stirring in his grave - were he in one. I can imagine the wonderful rant he would have produced when that legislation passed.
Called "The Man Who Pulped the Pulp Mill" by The Sydney Morning Herald, Bob cared more deeply and worked more effectively in the fight against Gunns proposed mill than anyone else. His tireless efforts help stop a project that would have ruined the Tamar Valley, decimated our native forests and most likely made Tasmania more of an economic basket case than we already are. Now our State Government wants to get the project back on the agenda. Lunatics.

And the third thing they are doing that will significantly affect our economy for the worse is slashing public sector jobs: 700 have already gone and another 500 are to follow. Much of the brunt will be borne in education and health. So the local economy will have less money circulating through it and the support we provide for our kids and sick people will also diminish. Wonderful ...

When I was growing up, my Mom always used to say, "If you can't say anything nice, don't say anything at all". Fair enough, so I'll end on a positive note: apart from our current weather pattern (which will change soon enough) Tasmania is a wonderful place to live: we've got a vibrant and world class arts community (a bloke who lives around the corner from me has just won the Man Booker Prize - his name is Richard Flanigan, in case you didn't know); it's one of the world's hotspots for tourism, with Lonely Planet ranking us fourth in its Top Ten regions to visit in 2015, and we've got the world's cleanest air and according to tripadvisor, some of the best food on the planet. So there!
Posted by Doug at 10:30 pm No comments: