Yes, "abusement" is a correct term. Yes, it is somewhat awkward but in this case I think it's a sounds more fitting than the  simpler "abuse". The event I'm referring to is that of our finance minister, Mattias Cormann, referring to Bill Shorten as an "economic girlie man". Now Cormann, who might sound like he's a South African migrant, actually came to us twenty years ago from eastern Belgium, where he grew up speaking German. (One might ask why he is was chosen to be Finance Minister when he has a background in Law, but that is another topic.) Assured of a seat due to his preselection for the third position on the Senate ballot in Western Australia, Cormann has (dis?)graced our parliament since 2007, thirteen years after his arrival in the country.

Maybe it's his teutonic background, maybe as a boy he worshipped another migrant who went on to become a politician. Whatever the case, Cormann was clearly channeling Arnold Schwarzenegger when he used the phrase "economic girlie man" ...

While referencing Schwarzenegger is one thing, trying to deny the language he used is not sexist is just plain silly on Cormann's part. Yet another federal Liberal politician who has no clue about the sexist connotations of what he's saying. Of course that's what you'd expect: Tony Abbott as leader could only see fit to fill one of nineteen cabinet seats with a woman. For those of you who don't believe that could actually be true, here's the evidence:

I guess Cormann's law degree from an eastern Belgian university makes him more eminently suitable as Australia's Finance minister than any federal female government member; after all, Cormann does take a piss standing up.

There's another twist to all of this that is somewhat amusing and makes one wonder if Cormann wasn't actually channeling himself being channeled. Here's a skit that aired about a month ago on Shaun Micallef's Mad As Hell which was a lovely little send up of Cormann, via his fictional advisor Darius Horsham.

At the same time that this little farce emerged, it was revealed that serious abuse of the 457 Visa Scheme has been taking place. A small snapshot of information on the government's "Department of Immigration and Border Protection" website gives a clear indication of the main purpose of the visa: it's designed to allow employers to sponsor workers from outside of the country to fill jobs that cannot otherwise be filled by Australian citizens or permanent residents:

However, a leaked report has revealed that the system is seriously flawed. There are 200 000 people in Australia on 457 visas. A report looked at a small proportion (about 1% of those visas) and  found concerns about 40% of the 1 800 people examined. Myriad issues have emerged. For example, many of the migrant workers are either not in the jobs for which they were hired or are getting paid substantially less than the statutory minimum of $53 900. Perhaps the most flagrant abuse of the system is at the other end of the scale: the CEO of Billabong is on a 457 Visa and is getting paid one million dollars per year. If that isn't a case of abuse of process I'd like to know what is.

From a personal point of view, what is most galling is the conclusion that up to 3600 people here on 457 visas are working as teachers. At the same time, half of all teaching graduates - about 8000 people - had not found permanent employment four months after completing their education training last year. Remember, the 457 visa is meant to be used by employers only when they could not find an Australian national or permanent resident to fill a vacancy.

The government's anti-union agenda in all this must be pretty clear for all to see. This cartoon from the Sydney Morning Herald shows the way the government is headed with the 457 Visa program and their plans to get young Australians off the dole and into jobs ...

When I started looking at this 457 stuff I decided to google "457 visa", as one does these days when one wants to get started on some research in the comfort of one's own lounge room. As you'd expect, at the top of the list were some links to government pages, some stuff from the media and, of course, a Wikipedia article. Then I wondered what would happen if I googled "457 jobs Australia". Incredible! There are all these pages where you can - apparently - start the process of targeting specific jobs. There's even this listing on Gumtree where is advertising on behalf of her clients for two chefs to come and work in Mulgrave, a south-eastern suburb of Melbourne. I find it hard to believe that they couldn't find two chefs to fit the vacancies from somewhere in Victoria let alone the rest of the country.

On a slightly more cheerful note, it looks like cracks are starting to widen in the the government's glossed-up image of a united front. If you live in Australia you've probably heard about the brouhaha that Bronwyn Bishop, the Speaker of House of Reps, created recently by banning burqas in the public gallery. (If not, you can read about it here.) Tony Abbott, said he thought it was probably unnecessary and that he asked Bishop to reconsider. Well, Bishop has now effectively called Abbott a liar. At least we're making news around the world for something other than our government's hostile stance on renewable energy which has led to the abandonment of plans to build more solar power plants. I enjoyed Leigh Dayton's take on Abbott's recent statement about coal being "good for humanity"... 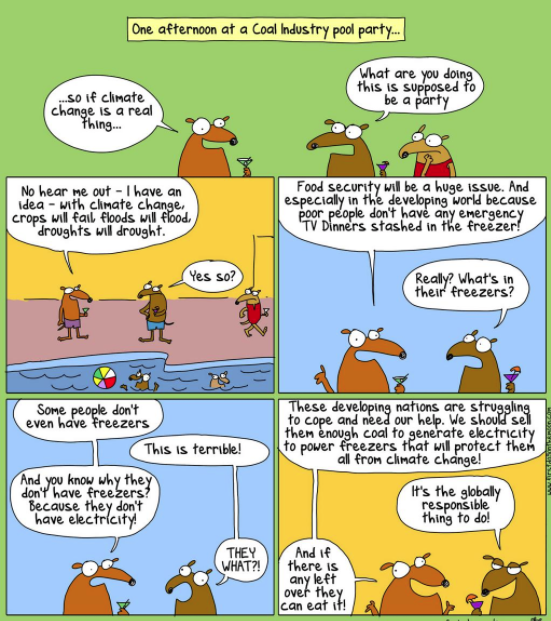 You're probably wondering why I'm so preoccupied with all this stuff (at least enough to blog about it). Well, I can't do much of the stuff I would otherwise be doing just at the moment as I've had a tiny bit of surgery to remove a growth on my little toe, along with the toenail underneath ...

It has now been five days and I'm starting to go a bit stir crazy, so I had to do something! Actually, the toe is just about healed up, but it will still be a while before I can pull on my climbing shoes. But there are always lots of other amusement at hand. Some of the things scattered around my foot that you might have noticed include:
We have also taken in a few films from the Italian Film Festival currently showing at our wonderful State Cinema. Bellissimo! And yesterday we went for a drive to Richmond to see the ducks ... 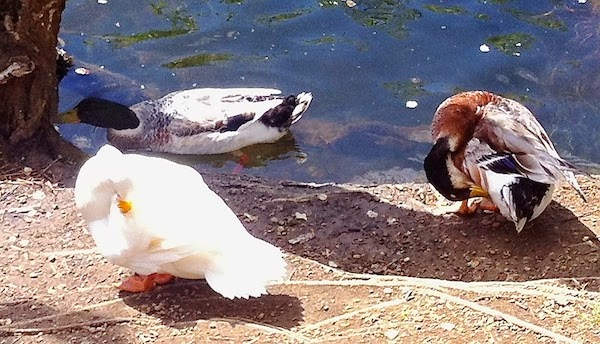 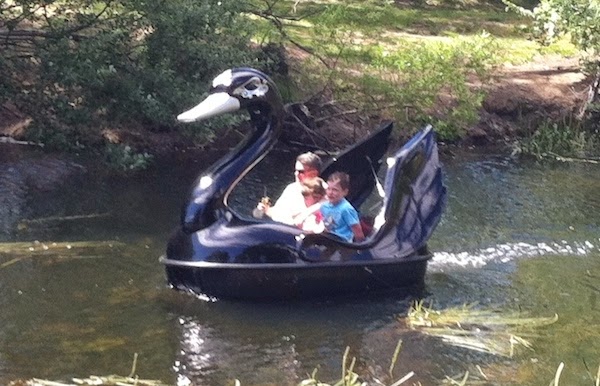 ... and have a bit of a stroll to see how my toe felt. Afterwards we treated ourselves to lunch at Frogmore Creek.  I thought it was absolutely fabulous. Di enjoyed the food too, but would have liked there to be a bit more texture. Here's a photo of the second course, an open pumpkin ravioli ... 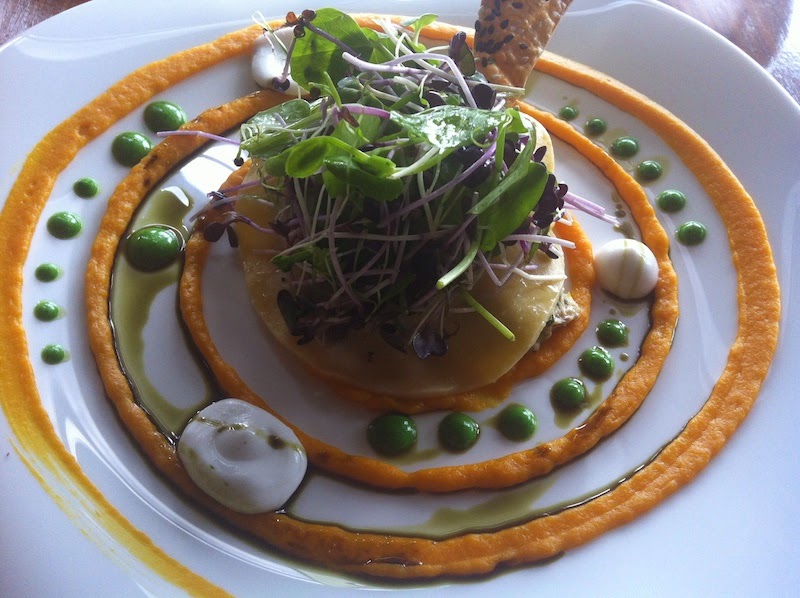 The day after tomorrow we plan to take the camper, which is hanging out on top of the shed ... 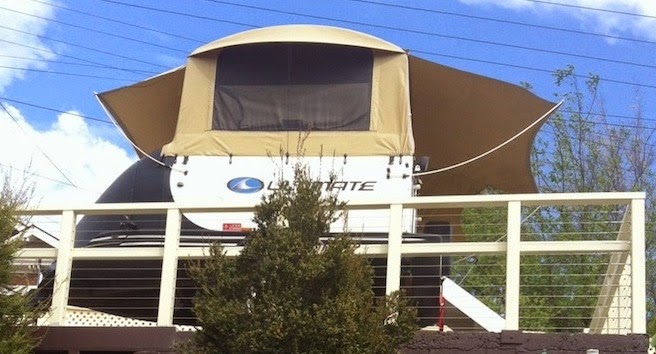 ... waiting for us to get our act together.

We plan to head up the east coast and will probably drop into Freycinet National Park, where I took this photo ...

Wish good weather for us, will you?
Posted by Doug at 6:00 pm No comments: