Being Part of Something Bigger

Today was May Day for magnificent kunanyi/Mt Wellington. A rally was held to protect the mountain from the odious spectre of a cable car construction on its southeast face. Adrian Bold, a would-be developer, entrenched in the power structure of southern Tasmania and crony of a number of Liberal Parliamentarians, has been spruiking his plans for a cable car on the mountain for a number of years.

Unfortunately, at present, due political process in Tasmania is no more than a rumour, a mere chimera. The current Liberal government has pushed through legislation compulsorily acquiring land to allow Adrian Bold to site the top terminus for his development between the Organ Pipes and the top of the mountain.

... merely to line his own pockets.

The good news is that there were thousands at the Cascade Gardens on this cool autumn day in solidarity with Tasmania's Aboriginal community, who are strongly against the construction of a cable car.

The mood was buoyant ...


Speakers who addressed the masses include, in order of appearance, new-wave Hobart Councillor Anna Reynolds, Member of the House of Representatives Andrew Wilkie, conservation messiah Bob Brown and Man Booker Prize winner Richard Flanagan (Flan the Man!).
Check out some of what Brown and Flanagan had to say.

Kunanyi is a such a wonderful place, situated as it is on Hobart's doorstep. The half of Tasmania's population who can view kunanyi from their homes feel connected to her and find her presence infinitely comforting. They refer to her simply as "the mountain". She's there and we love her.


Home to hikers, climbers, mountain bikers. Not to mention black cockatoos, currawongs, pademelons and possums. It's special and truly unique. Many of us think it exemplifies what increasingly brings visitors to Tasmania: unspoilt nature. Let's work together to keep it that way. 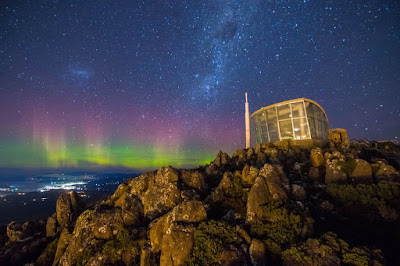