At last!  We've finally moved from the days getting shorter to now getting longer again. Can we tell the difference just a week later? Well, maybe not but psychologically it's a huge boost. On this page you can see sunrise and sunset times, and it tells me that we'll gain 3 ½ minutes between sunrise and sunset over the next week. And it shows that the difference between each day as you go along increases.I like the sound of that!

The Winter Solstice brought to an end the third annual Dark Mofo Festival - 10 days of hedonism on Hobart's waterfront, with 174,000 people eating, partying and then - some of them - washing their sins clean with a nude swim at sunrise on the 22nd ...

It's a pity that the days, although lengthening are also still getting colder. July is the the basement as far as our monthly temperatures go, with an average daytime maximum of only 11.7 degrees. Thankfully, we'll soon be heading slightly  north for the rest of the winter, with slightly warmer temperatures expected.

Actually, although lots of things die back in winter the growing season never really comes to a full stop in Hobart. We've almost finished picking tomatoes out of the garden, the last cabbage just came in from the cold and there is some lovely rainbow chard flourishing. We even have an open invitation to skip across the road and pick some of Sue's magnificent kale when the fancy takes us.

Nevertheless, it is great to see some things coming up out of the earth. Our garlic, which we were somewhat tardy sticking in the ground has nonetheless favoured us with shoots appearing out of the earth ... 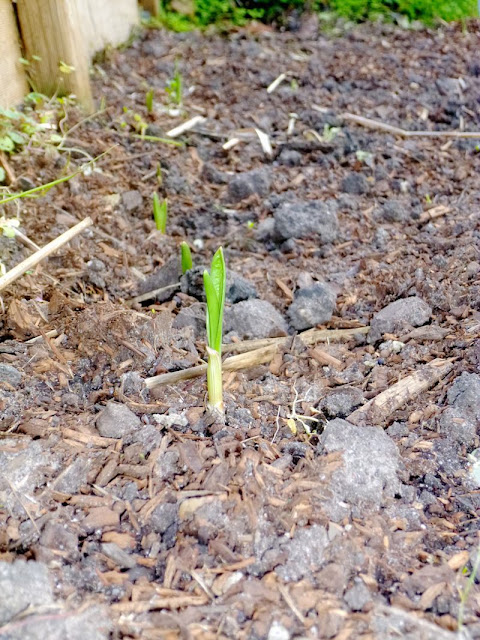 A few days ago I saw a handful of green spears emerging from the earth; this morning it was more like twenty or thirty. I reckon that before we leave in just over a week all of the sixty or so cloves I stuck in the ground will be reaching out of the darkness towards the ever-increasing sunshine.

Not long after I ruptured my Achilles tendon and badly mangled my ankle, our dear friends Heather and Tony turned up with a pot to cheer me up (that's a pot, not pot). They told me to just put it out in the yard and it would look after itself. Well, it has. Very soon - almost certainly before we go away - we're going to have daffodils showing themselves ... 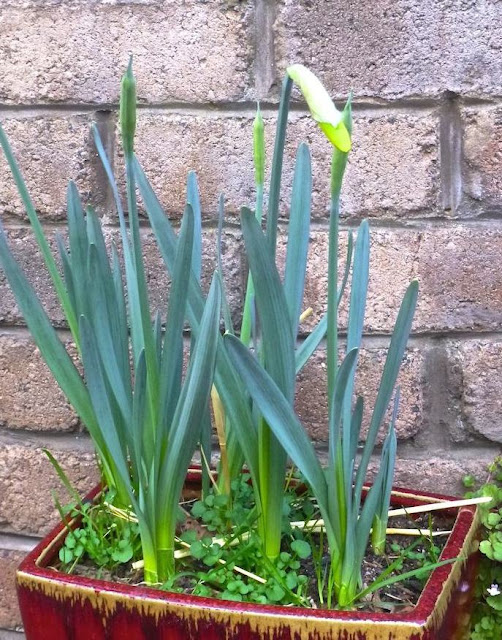 As previously mentioned, I decided to pull out the Tea Tree hedge I had been nurturing in favour of espaliering some apple trees. Well, the framework is now finished and keenly awaiting the trees ... 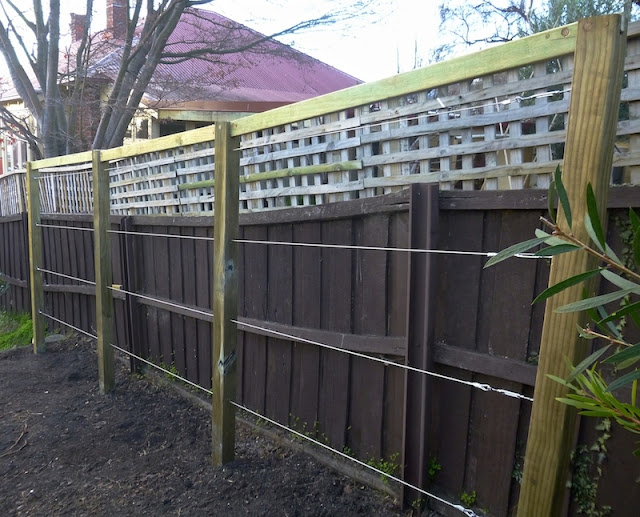 Hopefully Woodbridge Nursery will come to the party and let me pick up the trees before we leave for our big ride, so they can have all winter to settle in. I'm planning on using the KNNN method of espalier. It's all a learning curve, so wish me luck! 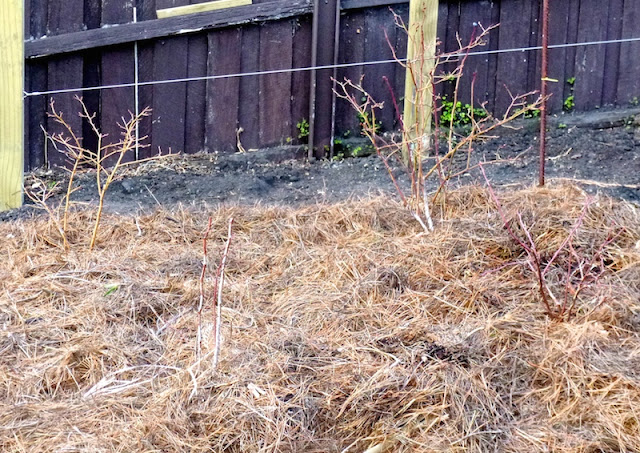 They are still mere infants really, but seem to getting themselves established. I've pruned the one in the left foreground right back because it was a little leggy and I want it to fill out a bit. Hopefully we'll have a few bowlfuls out of them this year.

With just a short time now before we head off for our long ride we've cut down on the hours we're spending on our bikes. We're still doing the occasional 100+ km ride when the fancy takes us, but mostly we are trying to focus on quality rather than quantity. In the three months since I've been back on the bike I've done a touch over 4000 kilometres and Di has done a few hundred more than that, having started a little before me, so we figure we've got enough distance in our legs to cope with the demands we'll face. (I'm also trying to do a bit more walking, which I've neglected somewhat in trying to get cycling fit.)

Today's ride ended up being even shorter than we'd anticipated. I started to notice a metronomic noise as we got out near the 20 kilometre mark, which became more pronounced. Upon stopping and examining the bike I noticed that I  had a bulge on my rear tyre, which was hitting the brake pad each time the wheel revolved. Here's what the bulge looked like ... 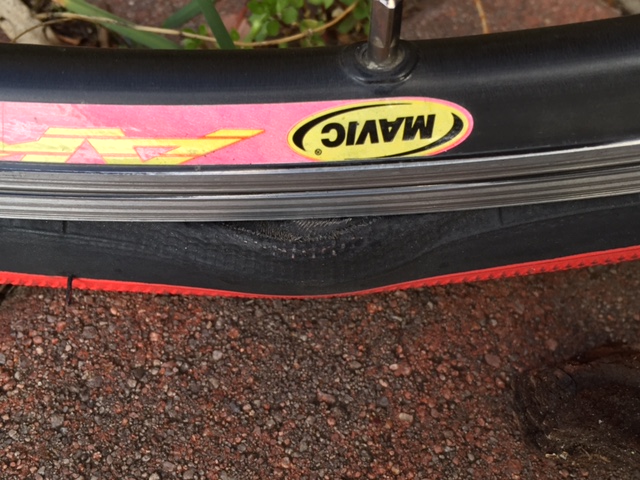 Not very confidence inspiring, eh! I tried letting the air out and re-seating the bead of the tyre a couple of times, but the bulge just kept reappearing. We reluctantly decided to turn around and head for home. It's probably a good thing we did because as things turned out there was a fault in the actual tyre bead that had worsened to this extent by the time I got home ... 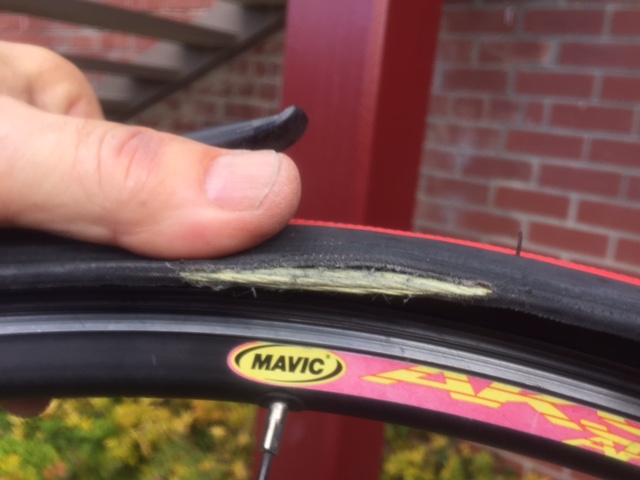 As these were brand new tyres out on their first ride (we had just put them on in preparation for our upcoming adventure) it had to be a manufacturing fault. We've had lots of these tyres before and never had a problem before. They are a great all-rounder: not too heavy yet durable and highly puncture-resistant. Luckily I'd bought two new sets so was able to replace this faulty tyre with another. We'll only have a handful more rides before we fly across to Perth, so hopefully this will be the only equipment glitch we'll have between now and then!
Posted by Doug at 6:32 pm