Rambling In and About Mt Field National Park

I have no idea how many times we've been to Mt Field. Di first visited the park in the winter of 1967 and she remembers it as a "terrible trip". The group she was with waded through deep snow on Tarn Shelf amid masses of blackened Pencil Pine skeletons (which were probably burnt in the massive fires that swept through the Central Plateau in 1960). Since that inauspicious occasion we've been to the park on many, many occasions in all seasons: with family, friends, school groups and lots and lots of visits as just a twosome.

The park has such diversity, from tall trees to stunted alpine heath, waterfall to peatbog to broken rockscapes - lots and lots of broken rockscapes.  It's an old and shattered landscape with its own unique beauty. One of our most memorable visits was another winter trip when we wandered across to K Col in snow. Most of the way the snow was compacted and easy walking, but once we neared the col we found ourselves wading up to our thighs for what seemed an eternity. Finally we arrived at the col and were pitching our tent when a bunch of skiers effortlessly glided up to our campsite for a chat, having spent the day zipping around the outer reaches of the park. Overnight the weather turned warm and we laboriously waded all the way back to Lake Dobson. Not long afterwards we bought our first cross-country skis.

Realising that we haven't been to Mt Field since I smashed my ankle, we decided to head up there yesterday for a hike.  There is a huge range of walks that one can do at Mt Field, from a half hour visit to one of the waterfalls to a fast-moving full day return trip out to Mt Field West, to more sedate overnight wanderings about the alpine. We decided to do the popular Tarn Shelf - Lake Webster Circuit but, for a change, in the reverse direction.

Along the first section towards Lake Webster we were treated to several visits from curious - or perhaps slightly resentful - black cockatoos. From the numerous mangled blooms scattered along the track it was clear they'd been feeding on the many banksia marginata in full flower alongside the track. They were very vocal and it was a real joy to be entertained for a half hour or so by our most favourite of birds. (We fervently hope that at least in the alpine areas of Tasmania, the quirky, endearing black cockatoos won't be pushed out by invasions of their noisy sulphur-crested cousins, which is happening a lot in southern Tasmania, another apparent consequence of climate change.) Because of the dense bush along this section of track we didn't get the opportunity for a good photo but were particularly delighted with a flappy flyover from a flock of six birds.

One of the highlights of the walk is reaching Twilight Tarn and spotting the historic hut ...

It's an idyllic little spot and, dating back to the 1920's, was once a winter social hub, with skating parties on the lake and formal dinners in the hut, both accompanied by strains of classical music playing on a state-of-the-art phonograph.

It is upon reaching the tarns that the Pencil Pines start to appear. And what's so special about these trees? That causes me to mention them so frequently? Well, they are endemic to Tasmania, grow between only between about 750 and 1300 hundred metres above sea level, can live to over 1200 years and are part of the unique ambience of Tasmania's alpine lake and tarn environment.

We really like actually walking when we're walking, and often have to consciously stop to take pictures. Once we reached Tarn Shelf we slowed ourselves down a bit and decided to do just that. The once blackened skeletons that Di remembers seeing back in 1967 are now ghostly ...

On what I would call the far end of Tarn Shelf (which perhaps should be called "Tarn Shelves",  as it isn't all one level but steps up in a series of small sections) most of these ancient and beautiful alpine trees were obliterated. In sheltered pockets small copses remain, but mostly one sees only alpine heath and masses of dead pines, with a scattering of Snow Gums.

A little further along, the devastation isn't quite so bleak and there is a mixture of dead and living trees, albeit all younger ...

At one of the tarns along the shelf a couple of ancient survivors cling to life, now prostrate and bowed over the water. Here's one of them ...

The park itself is an ancient and broken landscape, most notable at these higher elevations where vegetation can't easily get established and hide from the elements. In exposed areas where vegetation was able to get a foothold is where the big fire seems to have done its worst damage, yet tranquil pools can be found with a fragile but rich fringe vegetation ...

In under the shelter of the Rodway Range much of the vegetation escaped relatively unscathed and there is a rich mixture of heath, Pencil Pines and Fagus, which isTasmania's only deciduous tree ...

I'm going to sneak in a photo here from a previous perambulation along Tarn Shelf in the autumn, just so you can see what the Fagus looks like when it is on the turn ...

On the way back down to Lake Dobson one can opt for the Snow Gum Trail, which we always take so we can appreciate these hardy trees, twisted, bent but unbowed in the face of the ferocious winds that roar through the landscape. the first tree is a bit of an outlier, and coming upon it is like greeting an old friend ...

The greater mass is just down off the plateau, taking what shelter they can amidst the boulders ...

Here's an aerial view of this particular walk ... 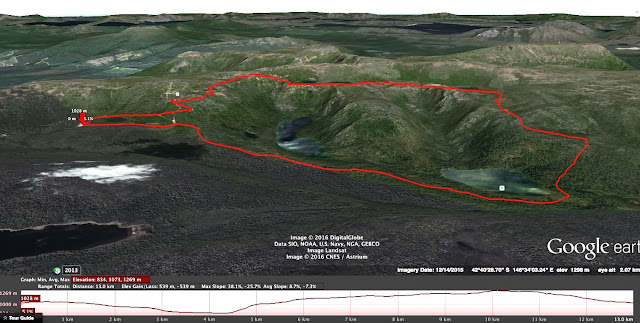 ... and a map of Tasmania showing Mt Field's location on the edge of the Southwest Wilderness ... ... and, if you're reading this over the big water somewhere and aren't quite sure exactly where our little island lies in the greater scheme of things, this might help ...

So, if you ever ramble around Tasmania down the track, please allow yourself enough time to have a proper look at our diverse environments. Drop into Mt Field if you can. I'm confident that you'll find it is well worth a visit.
Posted by Doug at 4:42 pm