Dianne and I are spending a bit of time out in the Wimmera at Natimuk, mixing up some climbing, cycling and walking. We'd booked the ferry back in November to come out in March for our regular climbing pilgrimage to Mount Arapiles and the Grampians. But then I ruptured my Achilles and smashed up my ankle, so we ended up riding across the continent instead. Although we would like to be doing more climbing my ankle is still not up to much so a mixed regime seems like a good idea. Besides, we've been reinfected with the cycling bug and don't want to be away from our bikes!

Conditions looked favourable for a slightly longer ride yesterday so we decided to ride to Goroke and back.  From where we are at the Natimuk Lake Caravan Park to Goroke is just under 50 kilometres so our plan was to ride just past the town and then back in to refill our water, have a little pause and a small snack before returning to our base at Natimuk Lake. (The lake has dried up completely now after filling in 2011 following extensive rain and flooding throughout Central Australia in 2010.) Despite not being fully cognisant of the true direction of travel things worked out well as far as the wind went. Here's what our route looked like ...

As you can see from the image the landscape is almost completely turned over to agriculture - broad acre farming with lots of wheat, canola and bean crops. Sadly, this year is proving to be very dry (we heard that they haven't had any rain in Goroke since August) and many of the farmers are starting to bale up their crops. Otherwise much of it will just die off. This way they will at least get something for their investment of time and money.

The terrain is largely flat out this way  (from memory I think there was just over 400 metres of climbing over the 100 kilometres of the return journey), conditions were fairly still and we were able to spin along at a pleasant pace without too much heavy breathing, which was pretty much what we had in mind for our morning's outing. Actually, there is some lovely cycling to be had out here in the Wimmera on a network of quiet country roads. The only downside is that towns are few and far between so loops are more difficult to contemplate because of the scarcity of opportunities to refill water bottles.

The serendipitous aspect of yesterday's journey was that, unbeknown to us, there just happened to be a vintage and classic car rally on in Goroke, the centre of the magnificently wide main street was lined with perhaps a hundred old vehicles. The highlight for me was a 1929 Rugby coupé. It looked something like this ... 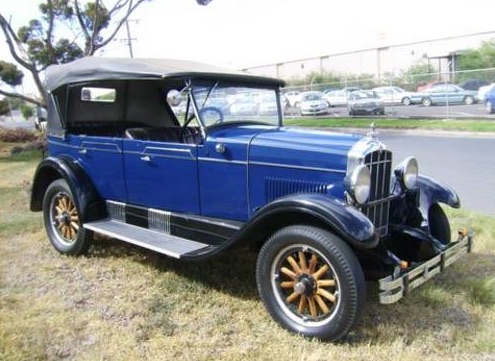 What really caught my eye were the wooden spokes. According to information posted on front of the vehicle it was found in a shed in 1936 and transported to another shed where it lay idle for another 39 years before being restored. There was also a Canadian flag sticker on the windscreen but the owner wasn't about so I couldn't ask him about the connection.

The ride back was very pleasant and we finished up averaging just on 26 kilometres per hour. I know that's not at all impressive but, considering that we didn't draft at all and were mostly cruising alongside one another chatting and finished the ride feeling pretty good, we are pleased with the overall pace. An iced coffee at the Natimuk Café followed by a swim in a newly-discovered waterhole just nearby the caravan park segued quite nicely into lunch and a relaxing afternoon of reading.
Posted by Doug at 8:43 am